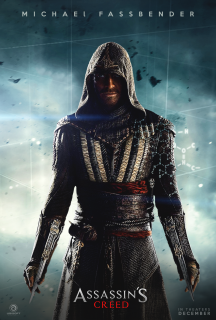 WOODBURY, NY (PRWEB) NOVEMBER 29, 2016 — AriZona Beverages and 20th Century Fox are teaming up to celebrate the highly anticipated release of “Assassin’s Creed,” in theaters December 21. For AriZona’s first partnership with a major motion picture studio the company has created three Limited Edition collectible cans with an amazing sweepstakes for fans to win one of hundreds of prizes.

The program features limited edition Arizona Green Tea cans with Assassin’s Creed branding. Fans can uncover one of three collectible “Assassin’s Creed” cans when they peel off the out wrap.

“We’re excited to partner with Arizona Iced Tea on their first ever film partnership. It’s been great to work with them to create a unique experience for consumers and fans,” said Zachary Eller, Senior Vice President, Marketing Partnerships, 20th Century Fox.

To continue the celebration, one lucky winner will win the prize of a lifetime. The winner and a guest will be flown out to Los Angeles for an amazing Assassin’s Creed themed prize. The grand prize includes a three-night stay, a VIP tour of 20th Century Fox Studios and a private screening of “Assassin’s Creed.” Contest information will be announced via stickered AriZona products throughout the United States as well as on AriZona’s social media.

For those who can’t be the grand-prize winner, they can still win – hundreds of other winners will have the chance to win “Assassin’s Creed” figurines of Aguilar, Maria, Aguilar’s Hidden Blade and the Apple of Eden; the perfect keepsake for any fan.

For more information on this partnership, please visit: http://www.drinkarizona.com/acmovie.

AriZona Beverages, founded in Brooklyn, N.Y. in 1992, is proud to be a family owned and operated American company. AriZona’s mission is to offer top quality beverages in uniquely designed packages that are accessible and affordable. AriZona Beverages — makers of the number one ready-to-drink Iced Tea in America – holds a unique position in the global beverage industry with its iconic $0.99 big can and “keeping it real” no frills approach to the consumer market. AriZona never pays for glitzy advertising campaigns to gain consumer loyalty and is constantly ahead of the curve, carving out trends without the use of focus groups and market research. With a loyal following across various demographics, AriZona pulls its own inspiration from its fierce social media following and devoted fan base. To learn more about the AriZona please visit drinkarizona.com; Facebook: AriZonaIcedTea; Twitter/Instagram/Pinterest: @DrinkAriZona

Through a revolutionary technology that unlocks his genetic memories, Callum Lynch (Michael Fassbender) experiences the adventures of his ancestor, Aguilar, in 15th Century Spain. Callum discovers he is descended from a mysterious secret society, the Assassins, and amasses incredible knowledge and skills to take on the oppressive and powerful Templar organization in the present day. “Assassin’s Creed” stars Academy Award® nominee Michael Fassbender and Academy Award® winner Marion Cotillard. The film, directed by Justin Kurzel, is produced by New Regency Productions, Ubisoft Motion Pictures, DMC Films and The Kennedy/Marshall Company; co-financed by RatPac Entertainment and Alpha Pictures; distributed by 20th Century Fox. “Assassin’s Creed” opens in theaters on December 21, 2016.