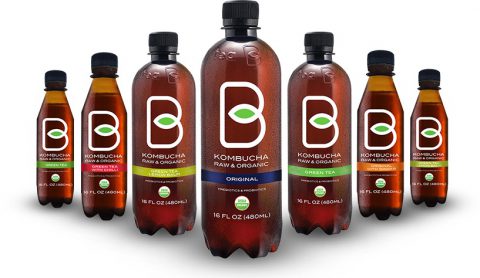 After signing with Big Geyser to distribute its line of shelf-stable kombuchas in New York, B-Tea Kombucha is working to form partnerships with as many as a dozen distributors to continue expanding the brand’s presence throughout the country, including a launch in California this month.

“Although our initial focus is going to be in New York and the surrounding area, we’re planning to launch probably a dozen of distributors, most of whom are probably part of the [Northeast Independent Distributors Association] group,” Tseytin said.

B-Tea is being distributed by Fischer-Thompson Beverages and High Grade Beverages in New Jersey and is in discussion with other suppliers in New England and Pennsylvania.

B-Tea Kombucha is available in 8 oz. and 16 oz. bottles with eight flavors: Original, Green Tea, Lemon Balm, Tranquility with Aloe Vera, Serenity with Chamomile, Original with Ginger, Lemonade, and Chili Cleanser. It retails between $3.99 and $5.99 per 16 oz. bottle.

Tseytin said he was excited for the brand to enter California, because it was where kombucha was first popularized in the United States. He added that he feels the brand’s shelf-stable products will help it to stand out from other well-established American kombuchas that require refrigeration.

“We feel we’re totally different from every one of the 150-plus kombucha manufacturers in the United States,” Tseytin said. “I don’t want to give all the trade secrets away but our kombucha has been made at our factory for over 20 years and believe it or not in Europe, [where B-Tea is brewed], if you told them kombucha needs to be refrigerated they would be surprised.”

In a press release, Statewide founder and CEO Jeff Javidzad said the distribution company had been previously unable to carry kombucha because it doesn’t have refrigerated trucks. Likewise, Big Geyser COO Jerry Reda told BevNET last month that his company had long been interested in distributing a kombucha, but also lacked transportation for cold products, making B-Tea an ideal option in the category.

According to Tseytin, B-Tea Kombucha is also working to expand its production capabilities in order to increase capacity.

“I think with these DSD distributors we have the opportunity to give customers much better service and we can actually reach every little store, every corner store, every bagel shop, every place that may not receive distribution from refrigerated distributors,” Tseytin said. “So we feel that we have the advantage of getting much better penetration that way.”