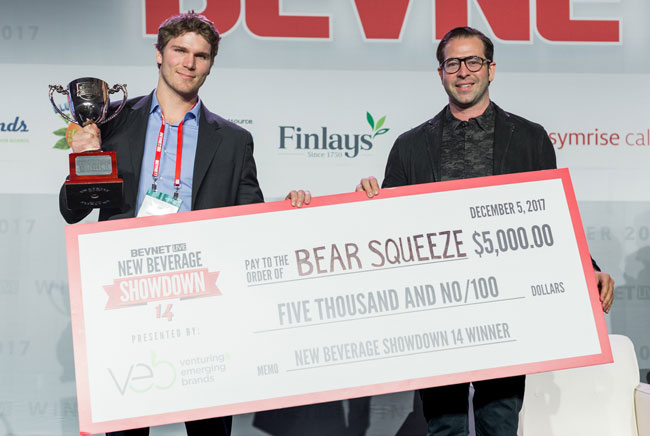 After a hotly contested competition, Bear Squeeze claimed the top spot in the New Beverage Showdown 14.

Ketogenic meal shake maker Bear Squeeze emerged victorious from a group of five innovative early stage beverage brands participating in the final round of the Showdown, which closed out the second day of BevNET Live Winter 2017 at the Loews Beach Hotel in Santa Monica, Calif.

“I couldn’t be more excited,” Bear Squeeze cofounder Max Baumann told BevNET. “It was a very competitive field and our concept is so new and novel that it is very difficult to go against brands in well known categories so to win is just a dream come true.”

Aimed at the performance driven lifestyles of ambitious entrepreneurs, professionals and athletes, Bear Squeeze is designed as a multi-functional and nutrient-dense meal replacement drink. The product, a powder that can be mixed with any liquid in its included single-serve bottle, has more probiotics than four kombuchas, more protein than three eggs and more nutrient variety than two kale salads.

In the final round, Bear Squeeze edged out Legacy Juice Works, Zen Basil, KRā, Kabaki and Mixwell, all of which secured their spots in the round after emerging from Monday’s semifinals. Each participant had five minutes to win over a panel of judges comprised of John Craven, the CEO of BevNET, Matt Hughes, VP of Incubation at VEB, Ken Sadowsky, senior beverage advisor at Verlinvest, Andrea Tyson, a grocery merchandising coordinator at Kroger, and Mark Rampolla, co-founder and managing partner at Powerplant Ventures.

The judges praised Bear Squeeze for its on-trend innovation, its use of data to understand the scope of the marketplace and its clear and approachable packaging.

“From the choices of ingredients to how they put those ingredients together in different formats… there was quite a bit of innovation here across [all the competing] brands,” Hughes said while talking about how the judges made their decision. “Some just executed better than others.”

Baumann told BevNET that he thinks his team’s extensive CPG knowledge, and their ability to use and understand numbers ultimately helped push Bear Squeeze to the top.

“The judges are very smart in that they kept going back to the numbers and the data,” Baumann said. “It’s not just about the tastiest product or the healthiest, but you need to have a sizeable market to enter and I think that was one of the things that went into BJ and my’s favor for this victory.”

On stage, Tyson echoed that sentiment as a key factor in the judge’s decision making. “Know your numbers,” she advised. “If you don’t get into the details of the numbers, we can get lost.”

The company, which is pre-launch, laid out a three-year business model that focuses on the direct to consumer online space prior to moving into traditional retail. As part of this plan, Baumann said Bear Squeeze will use the $10,000 prize to help contribute to the advertising of their Kickstarter campaign, which launches January 9. Their goal? To raise over $400,000 within a 35-day period and shatter Kickstarter records.