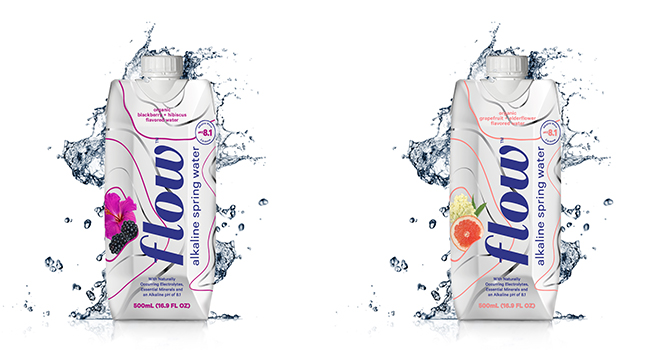 After introducing its first flavored SKUs at the beginning of this year and adding two additional flavors this summer, Flow Alkaline Spring Water is planning on giving the existing product lineup some room to breathe— that is, after it introduces two new flavors later this year.

The Toronto-based company, which sources its naturally alkaline mineral water from a family owned spring in Ontario, will introduce a pair of new certified organic fruit flavors in the fourth quarter of 2018 — Blackberry+Hibiscus and Grapefruit+Elderflower — to join its existing flavor lineup, which includes Lemon+Ginger, Cucumber+Mint, Strawberry+Rose and Watermelon+Lime. Speaking with BevNET this week, Flow founder and CEO Nicholas Reichenbach said that the new SKUs will help the company solidify its position in the premium water market. Under the direction of former Whole Foods category manager Matt Jimenez, who joined the company as a board adviser and as head of product development in 2017, Reichenbach said Flow was continuing to capture “the sophisticated flavor tone of what our target market is looking for in hydration but also in an infused flavor around detoxing.”

“The whole product direction set forth by Matt was about how do we get these sophisticated detox flavors, like you see at spas and hotels, and infuse them in water naturally,” he said.

The new Blackberry+Hibiscus and Grapefruit+Elderflower flavors were partially inspired by feedback from the company’s consumer base, as well as by conversations with retailers about what flavors were lacking in existing premium water product sets. But Reichenbach also said that Flow considered consumers’ taste preferences in the sparkling water category as well, noting that the dynamic flavors found in seltzers have been noticeably absent in premium still water.

“We took a look at categories of carbonated and asked ourselves, ‘what is the leading flavor in sparkling flavors?’ Grapefruit went to the top fast, and blackberry was second,” he said, adding that the inclusion of hibiscus and elderflower in the two respective new varieties helped to smooth out the fruit-forward flavors. “We really needed to find a pairing agent to soften the grapefruit, to add that little kind of sweet flowery undertone to it. For blackberry, hibiscus isn’t overly pungent, but it has a very sweet taste to it.”

While expanding its own brand, Flow has also recently looked to take advantage of co-packing opportunities at its production facility. The premium water brand is working with Mindfull Inc., the independent beverage product development house founded by Jimenez, to manufacture a pair of new products: Vibe, an organic black tea available in pomegranate and mint flavors, and a four-SKU line of lightly sweetened organic green teas made in collaboration with and released under the brand name of premium yoga apparel and equipment maker Gaiam. Both items will use Flow Alkaline Spring Water as the base and will be packaged in 16.9 oz. Tetra Pak cartons when they begin shipping to retailers in October and November, respectively.

“In order to vertically integrate Flow’s production to get our cost of goods sold at a place where we can compete globally in the premium water category, we needed to make a lot of purchases and assets to build out our facility in Toronto,” Reichenbach said. “As a result of us moving into organic flavors, we had to buy state-of-the-art processing equipment to be able to do any low and high acid products off this Tetra Pak aseptic line. When we did that, we said to our shareholders that we would take on some strategic co-packing of like-minded brands to get the machines going when we’re not using them.”

Outside of the two MindFull products, Reichenbach said Flow had also opened the door to “about two or three” other co-packing relationships with “like-minded companies with adjacent categories to the water space,” including an organic isotonic beverage and a coconut water. He noted that two additional production lines were just installed at the production facility, and the company is currently operating at just 20 percent of its total co-packing capacity. 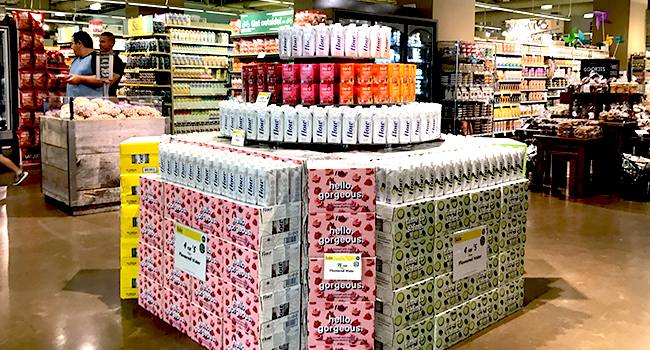 After the introduction of Blackberry Hibiscus and Grapefruit Elderflower, Reichenbach said Flow doesn’t expect to add any more flavors for at least the next year. Instead, he said the company will focus on driving trial through sampling activations, both in-store and through partnerships, such as with health and wellness brand Wanderlust. Flow served as the official hydration partner for Wanderlust, giving out over 250,000 samples in 31 cities across the U.S. The brand is also preparing to launch new multipacks — a 6-pack, available in all flavors, that will launch across retail partners in January 2019, and a bulk 18-pack that will be available at Costco — as it looks to expand beyond the natural channel and into conventional retailers.

And while flavor innovation may slow over the next 12 months, Reichenbach said that Flow will continue its ongoing efforts to improve the Tetra Pak carton itself; earlier this year, for example, the company introduced a cap made from sugar cane rather than plastic.

“Our commitment to our customers and to environmental standards will always be lead to innovations in packaging design,” he said. “We are focused on removing non-renewable resources from the package and converting them into compostable and renewable resources, and we’re definitely moving in that direction.”