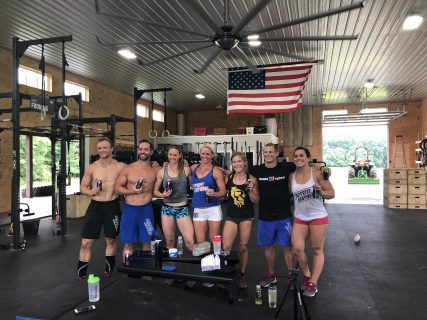 GENEVA, N.Y. — Cheribundi Inc., the leading producer of tart cherry juice products, continues its legacy as the secret weapon of over 220 professional and collegiate sports teams who drink Cheribundi as part of their daily training regimen. Cheribundi is the choice of elite athletes including New England Patriots Jason and Devin McCourty, Olympic gymnast Aly Raisman, and is now the power behind CrossFit Mayhem and Mayhem’s teams led by 6-Time CrossFit Games Champion, Rich Froning Jr.

Drinking tart cherry juice is scientifically proven to improve athletes’ overall performance by reducing muscle soreness, speeding up recovery, boosting immunity, and improving sleep. Cheribundi has been a part of CrossFit Mayhem Freedom’s and CrossFit Mayhem Independence’s training regimen leading up to their first and fourth place finishes, respectively, at the Central Region Competition held in late May. Both teams are advancing to the 2018 Reebok CrossFit Games in Madison, WI in August.

“Providing a proven training resource for muscle recovery for athletes has been a part of Cheribundi’s mission ever since the company started in 2004,” said CEO Steve Pear. “We are proud to be collaborating with to top level athletes and nutritionists, as we work with them to develop innovation-based products, like our new 100% Tart Cherry Juice.”

Gold Medalist and American Olympic Gymnast Aly Raisman has competed in the most renowned sports comptetion in the world and also relys on Cheribundi. “It’s become an important part of my daily routine. I drink Cheribundi after workouts and before bed which helps with recovery and sleep. I want people to know there is a natural option for both that also tastes great!”

Randy Bird, Director of Sports Nutrition at the University of Virginia, values the health benefits of tart cherries and encourages his athletes to drink Cheribundi daily. “The phytonutrients and antioxidants in each Cheribundi drink are vital to aiding in the reduction of muscle soreness. Tart cherries also produce natural melatonin to help with nightly rest.”

Other collegiate and professional sports teams using Cheribundi include:

Founded in 2004, Cheribundi produces one of the most powerful super fruit juices in the world. Their tart cherry juices are all natural, not from concentrate and are crafted through a one-of-a-kind juicing process, developed by scientists at Cornell University, to create a natural product with nearly 1.5X the antioxidant strength of other juices. Known for delivering benefits like boosting immunity, improving sleep, reducing muscle soreness and helping muscles recover faster, Cheribundi tart cherry juices are also one of the best tasting on the market.

Because of its effectiveness, Cheribundi has a unique connection to the athletic world. Over 220 collegiate and professional sports teams, plus thousands of elite and amateur athletes, drink Cheribundi as part of their daily training routines.