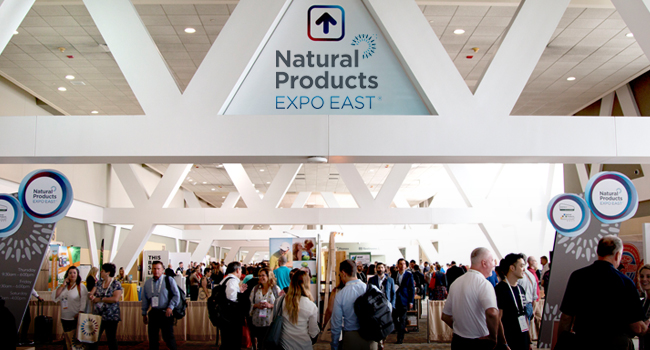 For the penultimate time before moving to Philadelphia in 2020, natural product brands and manufacturers from across the industry converged in Baltimore last week for the annual Natural Products Expo East trade show. And as in previous iterations, this year’s event, held Sept. 13-15 at the Baltimore Convention Center, featured a wide array of new products, line extensions, package redesigns and bleeding-edge trends, and BevNET’s editorial team was there to cover it all. In the first of a multi-part recap of news and highlights from the show, we examine new developments in RTD tea, take a look at Chameleon Cold Brew’s new innovations, chart the growth of the shot category and highlight a new wave of plant-based coffee creamer products. 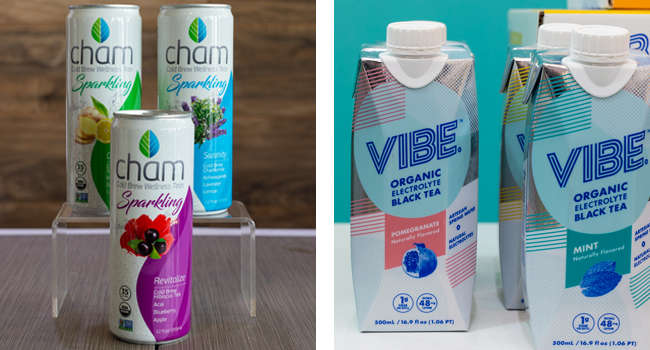 Ready-to-drink teas were among the most prominent category at this year’s Expo East show, as brands showed a desire to innovate and broaden their respective product offerings.

Boulder.-based MindFull Inc. is entering the market with a pair of new brands. The first is a collaboration with premium yoga apparel and equipment maker Gaiam for a branded four-SKU line of lightly sweetened (2g sugar) organic green teas that will begin shipping to retailers next month. The product is being produced under a licensing partnership with the yoga company, which leaves the door open for MindFull to develop other beverages under the Gaiam label. However, booth representatives told BevNET that the company will look to develop its own brands, such as Vibe, a organic black tea available in pomegranate and mint flavors that will launch in November. Both items will be packaged in 16.9 oz. Tetra Pak cartons, the same used by Toronto-based Flow Alkaline Spring Water, which provides the naturally electrolyte and mineral-rich spring water used in both Gaiam and Vibe. Both items will be priced between $2.49 and $2.99 per unit.

Elsewhere, chai maker Bhakti, fresh off raising $2.2 million in funding last month, continued to expand its RTD line. In addition to its 12 oz. iced chai products, which contain cashew milk, the brand introduced its newest refrigerated SKU: ginger turmeric with lemon. Behind the scenes, however, the company has shaken up its sales team and is said to be reassessing its strategy.

Bubbles were on the brain for several tea brands at Expo East this year. Cham Cold Brew Wellness Tea featured samples of its new three-SKU line of sparkling teas, which maintain the function-forward positioning of its still products with varieties like Revive, Defense and Serenity. Each 12 oz. slim can contains 35 calories and around 9g of sugar, but, according to the company, they will also be “ultra clean label” via the removal of citric acid, meaning the formulation is simply tea and juice. Meanwhile, having already established its credentials as a carbonated drink, Sound Sparkling Tea is pushing deeper into the space with the forthcoming launch of a “tea-infused” sparkling water line. Set to debut exclusively as a direct-to-consumer item this fall, the full four-SKU line, made with fruit extract and tea botanicals, includes two caffeinated and two non-caffeinated varieties. The formulation echoed the approach of Chicago-based Seasons Sparkling (formerly Seasons Soda), which shared samples of its lightly sweetened sparkling tonics made with tea extracts. 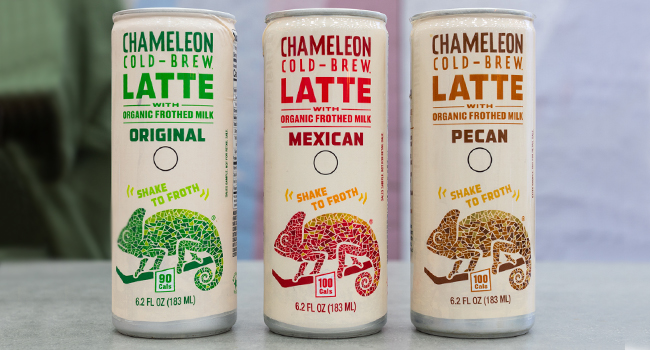 Continuing to build out its single-serve, ready-to-drink coffee portfolio, Chameleon Cold-Brew debuted a new line of frothy Cold-Brew Lattes. The products are made with organic whole milk and utilize a proprietary brewing method to give the canned coffees a foamy top and thick texture.

The new line, which will launch in stores in Q1 2019, includes Original, Pecan, and Mexican varieties and will retail for $2.99 per 6.2 oz can. The products contain 90 to 100 calories per can, depending on variety. Chameleon advises consumers to shake the can before drinking to create the froth.

The lattes follow a steady flow on new innovations from the Texas-based coffee maker, which debuted a sparkling cold brew at last year’s Expo East and expanded its multi-serve offers with a ready-to-drink, whole milk-blended line earlier this year at Expo West 2018. The products are expected to give Chameleon a direct competitor to La Colombe’s fast-growing Draft Latte line, although the former features a thicker and milkshake-like consistency. Chameleon wasn’t the only cold brew company during Expo East with offerings in the space: New York-based Rise Brewing Co. debuted a new line of nitro lattes which included oat milk and whole milk offerings.

Speaking with BevNET during the show, Chameleon president and CEO Chris Campbell noted the latte line is the company’s first shelf-stable offering, and will largely be rolled out via DSD to start. Having an ambient offering, he said, gives the brand access to new channels and will further the company’s growth.

Chameleon was acquired by Nestle last year, and Campbell stated that the relationship between the brand and the larger corporation has been beneficial and un-intrusive. He added he was relieved that Nestle’s resources have freed him from the need to court investors and seek constant capital, giving him the day-to-day time to focus on innovation and growing the business. Nestle’s executive team has also allowed Chameleon to operate without disrupting the existing order, Campbell said, providing productive guidance and support without commandeering the company. While shots remain a relatively small portion of the complete beverage landscape, the category is not immune from the influence and impact of broader industry trends. As other drink makers have sought to integrate more functionality and convenience into their products, a variety of shot makers that exhibited at Expo East are attempting to prove that the format is also in an ideal position to capitalize on those trends.

Cold-pressed juice brand Vive Organic debuted a pair of new additions to its Immunity Boost lineup, one with cayenne pepper and the other featuring elderberry. The brand has also added a new “Doctor Crafted” call out on its packaging, one that company representatives explained would greater emphasize the products’ functionality and efficacy. Cayenne Immunity Boost will be a Whole Foods Global exclusive item when it launches in October.

While Vive has worked exclusively in the 2 oz. shot space, other brands are moving into the format for the first time. Samples weren’t available, but Detoxwater showcased Veralixir, a highly concentrated version of the brand’s bioactive aloe vera formula. Founder Kenneth Park told BevNET the product aims to serve the same functional benefits as the core line — digestive health, skin elasticity and immunity — but in a more convenient format. The product is priced at $3.99 and is shipping to stores this week.

Meanwhile, amidst a broader repositioning of the brand as a functional beverage company, Temple presented a new look for its Pure Prana shots, along with the addition of a matcha-based SKU. 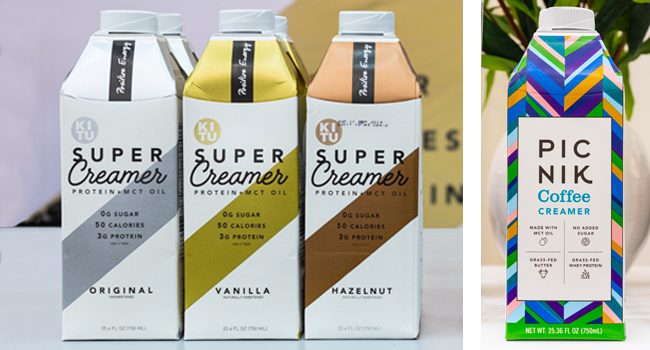 The U.S. coffee creamer category is a $5.5 billion space and projected to grow to $6.6 billion by 2023, according to market research firm Statista. But the space has seen relatively little innovation, until recently. The rise of the ketogenic diet and growing demand for medium chain triglyceride (MCT) oil products has created a space for new functional creamer products containing the ingredient.

Kitu Life (formerly known as Sunniva) Super Coffee, announced its entry into the creamer space earlier this month. At Expo East, the company debuted its Original, Hazelnut, and Vanilla flavored MCT creamers. CEO Jim DeCicco previously told BevNET that the dairy-based creamer gives the brand the ability to expand into on-premise accounts, in addition to growing its presence in grocery.

Know Brainer, which makes single-serve MCT creamer packets, announced it was developing a multi-serve creamer earlier this year. The two-SKU line was again showcased during Expo East, however, the company said it has run into production issues as it is struggling to find an aseptic processor willing to take on a small startup brand. The company is quickly finding an audience however, with its instant MCT coffee products running out of stock on Amazon.

Keto is not the only trend prompting innovation in creamers. Plant-based products are also on the rise. Oat milk maker Oatly debuted a new Mocha flavor for its Barista Blend line, Elmhurst Milked introduced its own barista blend, and Nutpods showcased its newly rebranded packaging.

Plant-based food and beverage company Forager Project is the latest to enter the plant-based creamer space, using Expo East to debut its new organic Half and Half made with coconut cream and cashew milk. The product will launch in January and retail for $4.99 per 16 oz carton. The launch comes amid a rebrand for the company, which has recently redesigned its labels and adopted straightforward, minimalist look.