Already one of the food and beverage industry’s biggest trade shows, Natural Products Expo West only keeps growing year-over-year. The recently concluded 2018 edition, held last week at the Anaheim Convention Center in Anaheim, Calif., was no exception. From new takes on existing categories to truly disruptive innovations, the BevNET editorial team was on the ground in force to cover the latest trends, products, brands, formats and categories that emerged from this year’s show.

As cold brew has evolved into a ubiquitous presence across all retail channels, coffee brands exhibiting at Expo West 2018 sought ways to keep this increasingly saturated market growing. For the larger and more deeply resourced brands, expanding coffee into more use occasions, flavors and package sizes was one of the show’s dominant themes.

Having debuted a line of bottled RTD cold brew drinks last year, Peet’s Coffee showcased a new four-SKU line of iced espresso drinks made with dairy in 8 oz. cans, the brand’s first venture into shelf-stable products. Positioned as a more coffee-forward take on sweetened iced coffee, each SKU — Vanilla Latte, Caramel Macchiato, Mocha and lightly sweetened Black & White — each SKU contains 130 calories and between 10 and 17 g of sugar and will retail for $2.99 each when they launch in late April. In addition to a 32 oz. multi-serve concentrate, Peet’s will also launch a canned nitrogen-infused version of its Baridi Black cold brew, which will complement a second nitro — Hair Bender — that will be released by third-wave coffee brand Stumptown, a subsidiary of Peet’s. 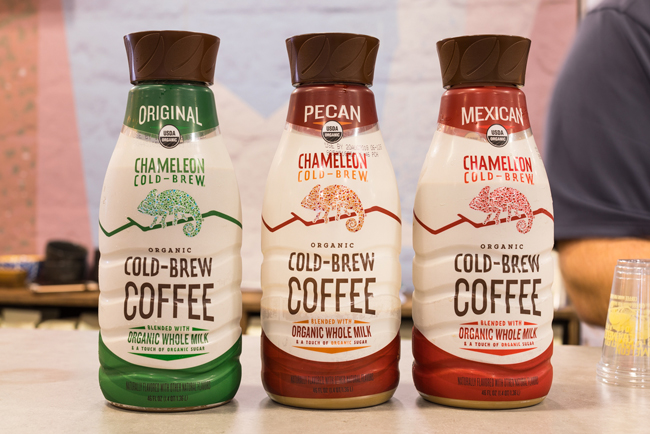 Elsewhere, Chameleon and High Brew both shared innovations that fit in different parts of the RTD coffee set. The former, exhibiting for the first time since its acquisition by Nestle last November, presented its new three-SKU line of coffee and organic whole milk blends in a multi–serve 46 oz. package set to debut in May. Available in Original, Pecan and Mexican flavors, each contains 5 to 6 g of sugar and will retail for $8.99. Representatives for Chameleon said the brand’s sparkling cold brew line, showcased early at Expo East 2017, was still being piloted to better explain the offering to consumers.

High Brew’s new sparkling line, however, should be ready to hit stores by the end of the second quarter. The three-SKU line — available in dairy-free Black, Vanilla and Mocha flavors — contains 12 to 14 g of sugar per 11 oz. slim can. The brand is also set to debut a 32 oz. multi-serve bottle for two of its existing cold brew flavors, Mexican Vanilla and Double Espresso.

Elsewhere at Expo West, coffee shots continued to develop as a convenience-oriented sub-category. In addition to a pair of shelf-stable RTD cold brew lines — one made with organic coffee, the other with non-GMO coffee — Austin-based Kohana Coffee shared an early look at its 2 oz. cold brew shot product, packed with 200mg of caffeine each, which are due this summer. Sir Owlverick’s also had a cold brew shot called Owlmighty at its booth. FORTO, an early entrant into the coffee shot category, also shared a new Vanilla flavor as part of its Extra Energy line, each with 200mg of caffeine.

Further still, consumers’ interest in functional beverages also appeared to be influencing the coffee category. SToK introduced a new cold brew infused with 16g of protein which will be available exclusively in 48 oz. multi-serve format. Icelandic yogurt maker Smari showed off an early look at its first entry into cold brew: a two-SKU line of coffees blended with skyr that contains 12g of protein each. And for those seeking an even bigger buzz, green coffee beverage brand Sunup Coffee shared sweetened and unsweetened versions of its new lattes, which boast a 285 mg of caffeine each.

As evidenced by the brands on display at Expo West 2018, kombucha continues to make strides in its journey from niche beverage to mainstream viability, thanks mainly to innovations in flavors and formats.

After years spent introducing consumers to the category with distinctive offerings and personalities, kombucha manufacturers at the show seemed to now be looking closer at meeting the demands of these consumers. As well as a new “verified non-alcoholic” seal, Bend, Ore.-based Humm Kombucha showcased a new three-SKU line of reduced sugar kombuchas, each with 5g of sugar. The brand will also be launching a multi-serve glass bottle in July that will retail for $7.99. 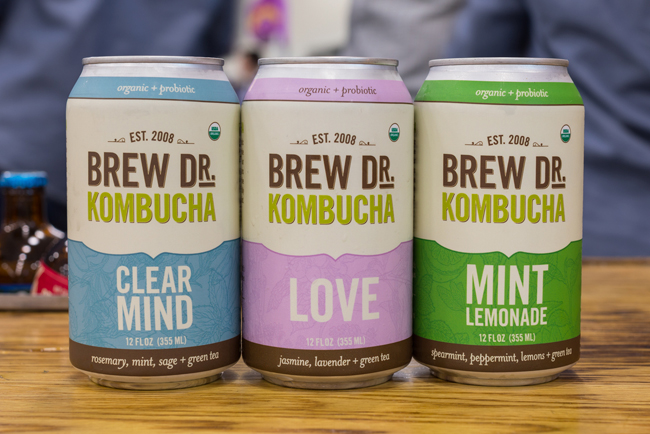 Besides Humm, other kombucha brands at Expo West offered different package formats as a way to make the category more accessible and convenient. Brew Dr. Kombucha shared a look at its new 12 oz. cans, which will go to market along with a 32 oz. multi serve glass bottle. Suja, which debuted its kombucha line last year, went for a smaller size with its new 8.5 oz. “Mini Booch” bottle size, which will be sold in 4-packs. The brand also shared two new flavors: Green Apple and Pineapple Passionfruit. Canadian kombucha maker Rise, meanwhile, changed its 1L bottles to a slimmer profile, allowing it to fit in a standard size cup holder.

Facing a market insurgency from plant-based alternatives, some dairy brands at Expo West looked for ways to push back against the tide.

Seeking to address lactose intolerant consumers, Australian brand The A2 Milk Company unveiled a new U.S. television commercial aimed at dairy alternative consumers who long ago abandoned traditional milk for digestive reasons. According to CEO Blake Waltrip, many consumers who feel discomfort drinking milk are not reacting to lactose, but instead the A1 protein found in some milk. By removing the offending amino acid, consumers can return to dairy. 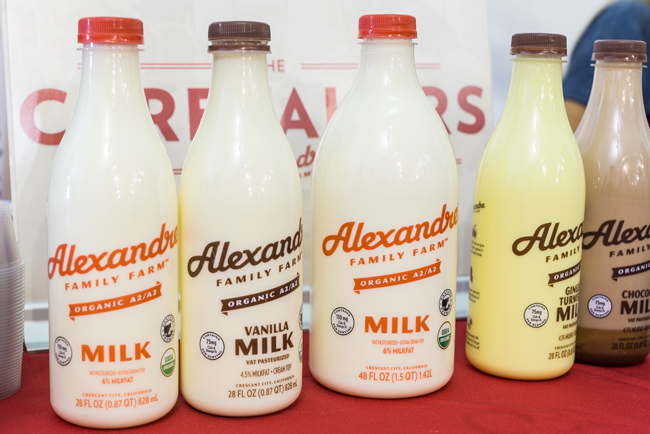 Although the brand’s differentiating innovation has been unique in the U.S. for several years, Expo West newcomer Alexandre Family Farm unveiled a line of flavored and original dairy milks also promoting the A2 protein.

Other innovations included smoothies and drinkable yogurts. Powerful Yogurt unveiled a packaged smoothie line launching in May to 3,000 stores. Dreaming Cow debuted a drinkable yogurt line last year and is now rolling it out with 1,100 Walmarts and Sprouts stores signed on to carry the line. Texas-based Lucky Layla Farms is looking to make a national play with a traditionally-branded line of drinkable yogurts sourced from the company’s own farms, the brand is available in Texas, Northern California, and Seattle and includes fruit-based flavors. Alove combined aloe vera with yogurt for a drinkable line.

The dairy alternative category continues to be a hive for innovation and growth, with established brands finding new approaches to product development while juice and traditional dairy companies seek to get a piece of the pie with plant-based milks.

Cashew milk brand WanderNuts debuted at the show, announcing plans to bring a four SKU line to the U.S. after becoming one of the top selling nut milks in Brazil. The brand boasts a clean label, USDA organic, and B Company certification, and will be available for sale via Amazon next month.

Canadian Manitoba Milling Co., a longtime flax supplier and subsidiary of Pizzey Ingredients, announced its own flax milk offering. The product doesn’t have a price point yet, but will be launched via ecommerce on Amazon and the company’s website.

Also hailing from Canada, oat milk and almond milk maker Happy Planet announced its U.S. launch. The brand launched stateside two weeks ago and has partnered with UNFI for distribution. The brand also previewed a line of plant-based smoothies.

Once again innovating beyond the cold-pressed juice line that launched the brand, Suja has added pea-based plant protein milks to its portfolio, introducing an original and chocolate flavor. The line includes pea, flax, and sunflower seeds and contains 8g of protein per serving. It will retail at a premium price point of $5.99 per 48 oz. bottle. At the show, the company said with almond milk booming, Suja wanted to present a nut free option for consumers. The line will launch in Costco next month.

And while Know Brainer launched a ketogenic MCT Oil creamer at the show, Wonder Fuel offered a plant-based alternative with its Organic Vegan Creamer with MCT Oil. Each serving of the product contains 5 g of MCTs and comes in multi-serve packaging.