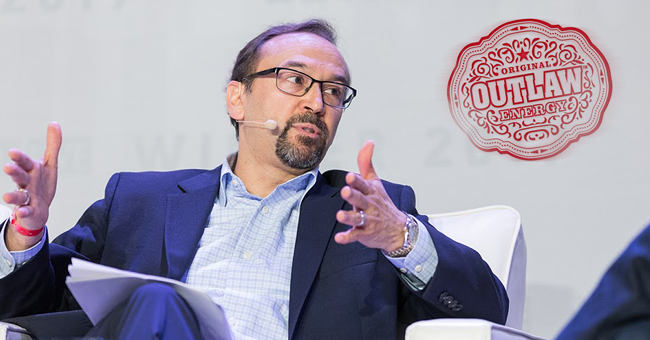 Speaking today with BevNET at the National Association of Convenience Stores (NACS) Show 2018 in Las Vegas, Delgado-Jenkins said he was drawn to the brand because he saw an opportunity to disrupt the energy category. The energy brand, co-founded in 2014 by former Kraft Foods VP Doug Weekes and Fuze/CORE Nutrition/BodyArmor founder Lance Collins, had begun working on a rebrand and reformulation when Delgado-Jenkins was chosen to take over the CEO position from Weekes, who remains with the company as COO, and help guide the new product development.

Delgado-Jenkins retired this June after eight years at 7-Eleven in order to spend more time with his family, he said. During a three month hiatus, he said he received numerous offers for advisory board positions and CEO roles, but chose Outlaw because of the opportunity to work with Weekes and Collins and because he felt the brand was in a strong position to grow.

“With Outlaw, it launched a couple years ago and [Weekes and Collins] felt like it needed a small relaunch,” Delgado-Jenkins told BevNET. “So they asked me to work with them and I came on board, worked with the team, and we’ve now reformulated the product and we’re going to be launching in Q1. So I was looking for a growing category where I could improve the product, disrupt the category, and play a significant role in continuing to propel its growth. That’s what I was looking for and I found that in Outlaw.”

The new products, which premiered at NACS, are now formulated with an energy blend sourced from yerba mate, ginseng, and natural coffee cherry. The drinks also include added electrolytes for hydration, B vitamins, and contain no artificial flavors or colors. The line is comprised of three flavors sweetened with cane sugar — Fruit Punch, Passion Fruit, and Peach Mango — and contain 45 calories per 8 oz serving. The zero calorie flavors include Fresh Zero, Passion Fruit Zero, and Peach Mango Zero varieties. Each 16 oz can contains 200mg of caffeine and will retail for $2.49. The rebrand also features new packaging which calls out functional benefits on the front of the can and a revised logo.

“We don’t plan on stopping our evolution of the product,” he said. “We want to put it in the marketplace, get feedback from customers and engage with them, and help them be part of how the product evolves and is continuously improved over time. We’re going to work really hard at that.”

Outlaw Energy currently has placement in about 10,000 stores nationwide and the rebranded products will roll out in Q1. Delgado-Jenkins said he is looking to partner with large retailers and distributors in order to “have access and reach every single retailer in the United States” but will continue to work with smaller distributors as well.

Coming from 7-Eleven where he played a critical role in selecting and building brands from the retail side, Delgado-Jenkins said he plans to bring that perspective to the brand side and “simplify the process” for buyers. He said he plans to take measures to ensure Outlaw Energy is always “100 percent in stock” with high fill rates, lining up planning processes with retailer’s planning processes, finding ways to cut costs to provide consumers with better value, and better communicating with retailers how they’re speaking to consumers and specifically working to drive traffic to stores.

“The way I look at it is as a brand I want to walk a mile in the retailer’s shoes because I’ve been in that position,” he said. “I’m going to be really big on helping retailers bring more customers into the store by creating more excitement and choices in the category.”