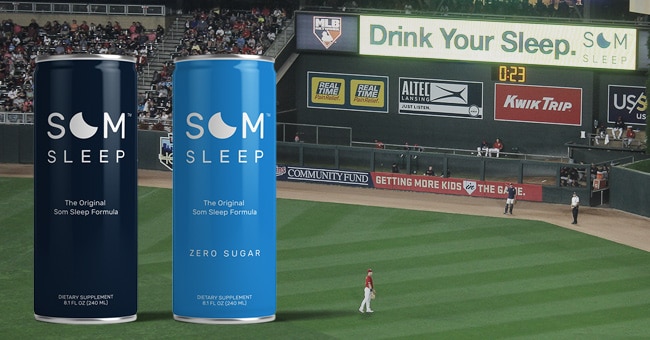 Developing a consistent quality sleep routine is a key element of living a healthy lifestyle. But for professional athletes, it’s about making a living.

Thanks to increased public interest around the role of proper rest as part of an overall healthy lifestyle, sleeping aids are enjoying something of a moment. Within the beverage industry, a growing number of brands — including nuun, Liquid I.V., Vital Protein and others — have launched products aiming to take a piece of a global sleeping aid market that is forecasted to reach $101.9 billion by 2023, according to P&S Intelligence.

California-based sleep aid beverage SOM Sleep has enjoyed a strong start since launching in 2018; its two-SKU line of 8.1 oz. cans is now sold at over 3,000 retailers including Bristol Farms, The Fresh Market, GNC, Gelson’s and Walmart. Yet it’s the chord that the brand has struck with professional athletes and sports teams which has given it a unique angle to attack the nascent sleep beverage space.

According to the brand’s chief marketing officer, Brad Marks, as of October, SOM currently sells product to about 68 professional teams across Major League Baseball (MLB), the National Basketball Association (NBA), the National Football League (NFL) and the National Hockey League (NHL). Some buy product at various points throughout the season; others have product in constant supply at home and on the road. He noted with pride that all four MLB teams with over 100 wins last season — the New York Yankees, the Los Angeles Dodgers, the Houston Astros and the Minnesota Twins, the latter of which SOM is now the official sleep product — purchased product from the brand last season.

“What was so nice was that these things developed organically,” Marks said. “Team players, coaches and front office staff were using our product, and that is where these actual deals with the teams, from a marketing perspective, developed.”

According to Marks, though the relationships grew organically, the idea that SOM could be a hit with pro athletes came up before the product was even launched. Thanks to a base of connections within the industry — Marks has a background in sports marketing — he began seeding the product with teams several months prior to SOM’s retail debut in January 2018. The timing was fortuitous: As the brand rolled out to retail, stories in the media — including a Sports Illustrated article that cited SOM by name — helped highlight the critical role sleep plays in athletic performance, and the difficulties players encounter in getting enough rest. In an article published in October, ESPN senior writer Baxter Holmes wrote that data suggests that “sleep deprivation is the NBA’s silent scourge — a pox on the bodies and minds of NBA athletes, with impacts both wide and deep.”

In the Colorado Rockies — SOM’s other official sleep product partner, along with the Twins — the brand found a club that served as something of a test case, due to the team’s variety of unique needs. Baseball’s grueling 162-game schedule, complete with double-headers, rain delays and late nights followed by early mornings, means players have little room for flexibility if they want to maintain a healthy sleep routine; this June, for example, the Rockies had just two days off. The Denver-based team also has the added challenge of coming in and out of high elevation as they travel home and away.

The cumulative effect of physical exertion and inconsistent or insufficient rest can have palpable negative effects on players’ ability to make quick decisions and stay mentally sharp in games, according to Tyler Hines, culinary nutrition specialist with the Rockies.

SOM is one of two sleep aid drinks — the other being tart cherry juice, which is naturally rich in melatonin — that the Rockies offers to players at its facilities and on the road. For Hines, the inclusion of gaba root and L-theanine (along with melatonin) as ingredients in SOM’s formula is significant, as they can help users both fall asleep and stay asleep. For many of the players, meanwhile, downing a drink is simply a more appealing way to take a sleep aid.

“The biggest thing that’s come back to me is how easy it is,” he said, noting that the club provided melatonin supplements to players prior to his hiring. “Changing from an 8 oz. can to a 2 oz. shot might be beneficial for some guys who don’t want to drink a whole can. But that also might be part of the appeal for other people. It could be something that assists in replacing something else that might be a crutch for players.”

Landing an unofficial endorsement — to say nothing of an official one — from a pro athlete or major sports team would be a coup for most any beverage company. For a startup company, particularly one built around a highly specific functional proposition, like SOM, Marks said the secret of its success in developing traction within sports has been a light touch.

“We don’t want to tell a player what they need to take,” he said. “We want it to be at their disposal so they can discover it for themselves. The best way we’ve been able to get that buy-in with teams is by getting product in their hands when they need it the most, which is at night or after a long flight on the team plane. We’ve worked really well with the teams to get it (to teams while traveling). Letting them discover it there is huge.”

From there, opportunities to establish more formal partnerships have emerged. As the official sleep product of the Rockies and the Twins, SOM is now advertised on signage inside both Coors Field in Denver and Target Park in Minneapolis. Even while pursuing those larger deals, the company is still working to bring individual athletes into the brand: A quick look at SOM’s Instagram homepage shows posts featuring Los Angeles Lakers center Dwight Howard, Chicago Bears defensive end Roy Robertson-Harris and others.

The company’s affiliation as the official sleep product of IMG Academy, an elite sports-focused boarding school in Bradenton, Florida, means a new generation of athletes will also be exposed to the product. The vast reach and resources that come with such partnerships goes beyond athletes and trainers; at IMG, for example, Marks said SOM on the night stand in all 150 rooms at the recently opened Legacy Hotel on the school’s 500-acre campus.

Though SOM has found natural synergy with sports performance, the company is cautious not to define itself exclusively under those terms. Marks said the brand has no plans to develop products or marketing activations built specifically around athletics, though the formula is NSF Certified for Sport. Data suggests that insufficient sleep is indeed a widespread problem; according to research conducted at Brigham and Women’s Hospital in Boston and Harvard Medical School, the national average sleep duration on work nights has decreased from eight and a half hours to less than seven over the last half-century.

“We wanted the best of the best to try SOM, but we are a consumer product for everyone,” he said. “This is not an athlete’s drink and we are not setting up the company to be a performance company. Yes, we are serving a function in terms of performance, but this doesn’t apply only to athletes.”