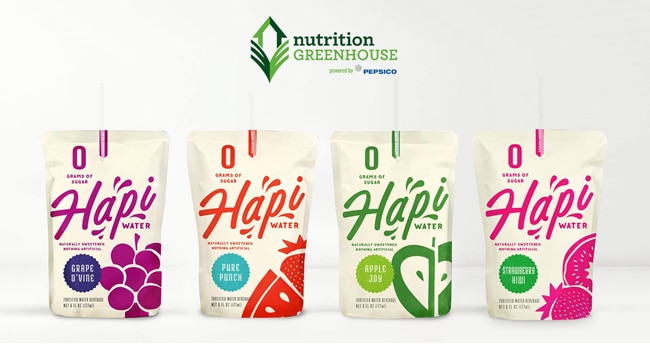 PepsiCo concluded the inaugural edition of its North American Nutrition Greenhouse accelerator program on Wednesday, naming Austin, Texas-based Hapi Drinks as the recipient of a $100,000 grant from the soda giant.

Hapi Drinks, which markets a line of sugar-free flavored waters aimed at kids, was one of three drink companies — alongside Remedy Organics and Torii Labs — to participate in Greenhouse, a six-month program designed to identify and support emerging food and beverage brands. The accelerator launched in November and provided each company with $20,000 and access to strategic mentors from PepsiCo. In addition to Remedy and Torii Labs, other brands that participated in the program include protein snack Bohana, IQ BAR, Rule Breaker Snacks, Sophie’s Kitchen, Too FIT, Wildway and Yofit.

“We are so proud of the progress that each of the ten companies achieved in the last six months, and it’s a testament to what happens when big and small brands come together,” said Daniel Grubbs, PepsiCo Ventures Group managing director, in a press release. “More than that, the program has provided a very unique leadership experience for our colleague-mentors, who all feel energized by the agility, speed, and creativity that the entrepreneurs have embodied. They are excited to apply this entrepreneurial spirit to their day-to-day work at PepsiCo.”

Speaking with BevNET earlier today, Hapi Drinks CEO Karsten Idsal said learning from those mentors was the most valuable part of his company’s Greenhouse experience.

“PepsiCo assigned two mentors to me that were both top-notch, awesome marketing minds that really helped me look at the business with a fresh set of eyes, especially the marketing aspect,” he said. “They just kind of provided some really good insight and helped us develop some plans to grow our same store sales at existing accounts, and it was really effective and helpful.

According to PepsiCo, the ten companies that participated in Greenhouse grew their revenues by an average of 200%. Idsal said the new funds will be directed towards helping the brand grow same-store sales in existing accounts.

“(The grant) will give us a little more ammunition to market the product effectively using some of the lessons we learned from the food accelerator,” he said. “I think, along with the $100,000, I’m going forward with a lot more confidence, as a result of the program, than I had before in our ability as a company to market the product well.”

Greenhouse is one component in PepsiCo’s larger efforts towards diversifying its product portfolio beyond sodas and salty snacks and into better-for-you categories and formats. In addition to acquisitions and brand revamps, the company has also been exploring various water consumption occasions with its acquisition of SodaStream and the recent introduction of a new table-top water dispenser for foodservice.

Hapi is currently sold on Amazon and in approximately 2,800 stores, including retailers such as Harris Teeter, HyVee, H-E-B and the Southwest division of Whole Foods. Though the Greenhouse program does not contain a structured path to investment by PepsiCo beyond the grant, Idsal said he will continue to have a relationship with his mentors at the company.

“I think they recognize that all ten companies in the program are forward-looking brands that are ahead of the curve as far as what consumers are looking for,” Idsal said. “They recognized us, and the results played out and to be able to win the accelerator program shows that we are onto something and a major shift is going on in the landscape from really sugary products to great tasting zero-sugar products.”