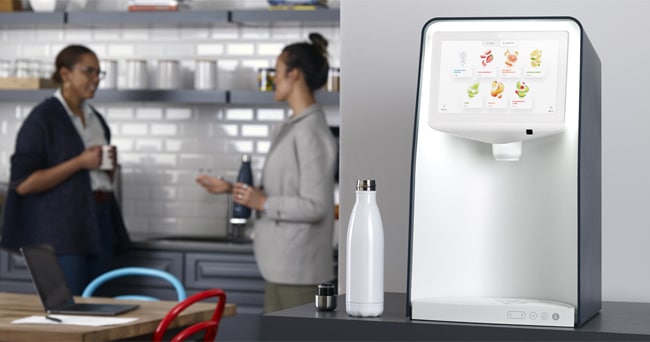 Billed as the next step in the company’s efforts to reduce its PET bottle footprint, PepsiCo today announced the launch of a new internet-connected water cooler system which will debut in June in select workplaces, universities, and hospitality partners.

The “connected hydration platform,” which is not yet named, will let users customize their drink preferences via a smartphone app, which also allows them to set daily hydration goals, track daily water intake, and see how many plastic bottles are saved with each pour. They can then store their personalized flavor options on a QR code sticker that goes on a reusable bottle. The platform dispenses still and sparkling water in six zero-calorie fruit flavors, and allows users to adjust carbonation levels, flavor intensity and temperature.

Speaking with BevNET, Scott Finlow, chief marketing officer of PepsiCo Foodservice, said the launch was the next component in Pepsi’s “Beyond the Bottle” strategy to reduce single-use plastic bottle consumption. Those efforts also include the company’s $3.2 billion acquisition of table-top soda maker SodaStream last year and last year’s U.S. launch of Drinkfinity. However, he noted that the new dispenser will be “a distinct proposition and platform” from SodaStream.

“A lot of the consumer insights and the operator learnings that fueled the development of this came from that pilot, which predates the SodaStream acquisition,” he said.

The system will be available in a countertop unit and a freestanding version. Finlow said such as Bubly and Aquafina, will not be integrated into the system during its initial launch. Pricing may vary by customer.