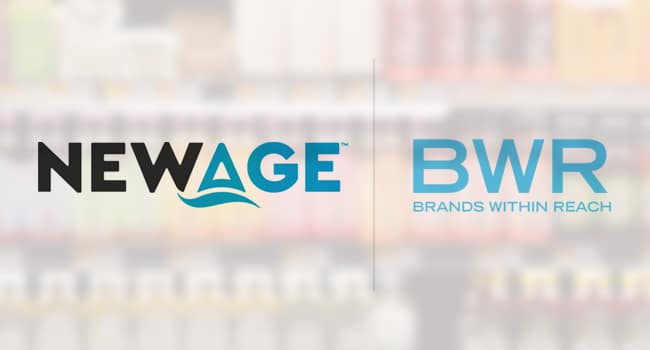 New Age Beverages today announced an agreement for the acquisition of Brands Within Reach (BWR), a deal which brings global brands such as NESTEA, Volvic, Evian and illy into the Colorado-based company’s portfolio.

According to New Age CEO Brent Willis, the transaction was made through a $500,000 payment, the transfer of 700,000 shares of stock, and the assumption of $2.5 million in debt by New Age.

Mamaroneck, N.Y-.based BWR is a marketing, branding and sales agency founded in 2003 by former Danone executive Olivier Sonnois. In addition to working with independent brands such as Kasumi Tea and Found, BWR works on brand licensing and distribution for select brands from within the portfolios of large strategics like Nestle (NESTEA, Volvic), Danone (Evian) and The Coca-Cola Company (illy ready-to-drink products).

New Age, a publicly traded company, will take over BWR’s existing agreements with those brands, which covers licensing and distribution for NESTEA, Volvic, and illy across all U.S. retail channels and for Evian in the natural channel. BWR’s other brands include Kasumi Tea, Found, and Saint-Geron Sparkling Water, as well as natural snacks Nature Addicts, Grande-Mere Lucien Georgelin and La Mere Poulard.

The combination of the two companies will bring New Age’s revenues to over $320 million, according to a press release.

In a press release, Sonnois praised New Age as “the fastest growing beverage company in the industry” and said the company’s two visions for healthier products are “completely aligned.”

“The combination of our brands, teams and infrastructure is unique and best in class, and a great value for our customers to work with one major company who can provide them with a full portfolio of growth brands in growth categories underpinned by superior execution and brand support,” he said.

Speaking with BevNET today, Willis said the deal was primarily about integrating BWR’s experienced team into New Age’s existing infrastructure. As president of the Brands division, Sonnois will lead a sales and marketing team of 50 people that will work out of BWR’s existing New York offices to support brands across New Age’s portfolio.

“Even though this comes with these globally recognized brand licenses, the bigger play is the whole infrastructure of people and warehousing and logistics and distribution footprint that we can drive our brands through,” he said. “It’s a much stronger organization. It’s the foundation for putting more things through that funnel.”

Adding brands like NESTEA and Volvic is also part of New Age’s ongoing effort to become a “one-stop” outlet for better-for-you functional beverages. Willis said the licensing arrangement will work the same as the company’s existing arrangement with Marley Beverage Co., in which New Age pays a flat licensing fee and retains 100% of revenues.

With new infrastructure to support them, the idea is to leverage global presence of BWR’s portfolio to “get the value out of the brands that we already have,” Willis said.

“NESTEA has 89% awareness in the U.S. We don’t have anything even in that same stratosphere [in our brands],” he said. “We think their portfolio is going to help some of our brands, especially with some of the customers that they are in already like Costco and Publix and Walmart.”

Over the last several years, New Age has been actively building its portfolio of functional beverage brands through acquisitions such as Coco Libre, Marley Beverage Co., and most notably Utah-based beverage company Morinda. While emphasizing that New Age was focused on organic growth and that it “has never been an acquisition roll up and never will be,” Willis also called the company’s pace as “excruciatingly slow” in picking up new pieces.

“I told our board at our March meeting that we would probably go on an acquisition moratorium for a year while we’re integrating Morinda, building these businesses, launching CBD, launching our Health Sciences division,” he said. “I told them we were going to focus on pure execution — that lasted about 45 days. But this is just financially too good of an opportunity for us to pass up.”