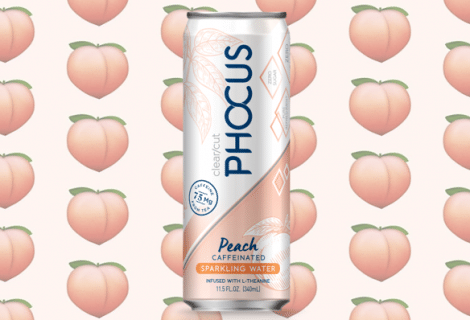 “As we discussed the introduction of a new flavor, it was important to us to create something that fit well into the current Phocus portfolio, and that we knew our customers would enjoy,” said Tom O’Grady CEO of Phocus. “Phocus has always been about light, bright, refreshing taste, so when we thought about developing a new fruit flavor, it felt like a natural fit to tap into our Southern roots and create Peach.”

Like the other Phocus flavor offerings, Peach is delicate and crisp and contains no sugars, sweeteners, sodium, or calories. With 75mg of natural caffeine in each can, combined with the addition of L-Theanine, Phocus provides a smooth-release of energy to keep drinkers fueled and hydrated all summer long.

In conjunction with the release of the new Peach flavor, Phocus will also rollout refreshed packaging, altering the orientation and positioning of several product descriptors on its slim cans.

Phocus is available at retailers nationwide and online at DrinkPhocus.com.

Clear/Cut Phocus (Phocus) is the first-of-its-kind premium sparkling water containing caffeine from green tea. Infused with the natural, mood boosting amino acid L-theanine, it is specially formulated to provide an even, smooth release of energy. Phocus contains zero calories, sugars, sodium, or sweeteners, as part of its commitment to keeping drinkers fueled and focused with nothing bad so they can ‘phocus’ on the good. Phocus is currently available nationwide in Grapefruit, Blood Orange, Yuzu & Lime, Cucumber, Peach and Natural flavors. For more information, please visit DrinkPhocus.com.