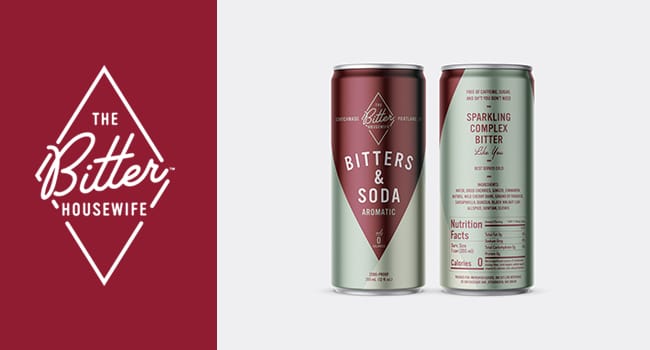 Having established its identity as a culinary-inspired cocktail product maker, Portland, Oregon-based brand The Bitter Housewife is aiming to kick off a new era next month with the launch of its first ready-to-drink product, Bitters and Soda.

Available in 12 oz. cans in a single SKU, called Aromatic, Bitters & Soda is a non-alcoholic, zero-calorie, caffeine-free sparkling beverage made with bitters. The product is currently available for pre-order on the brand’s website in 12-pack (SRP $30) and 24-pack (SRP $50) cases, which will begin shipping to customers in September. Bitters & Soda will also enter select stores in Portland, where it will be available in single cans for $3 and in 4-packs for $12.

Speaking with BevNET, Genevieve Brazelton, founder/CMO of Bitter Housewife parent company Improper Goods, and her husband Dan, the company’s CEO, explained that much of the inspiration for the concept came from their own experience: as they themselves began consuming alcohol less frequently at home, bitters and soda became a natural alternative. At the same time, many of their consumers were also shifting away from cocktails in search of more complex and sophisticated non-alcoholic beverages, particularly ones that could work in a social setting.

“Just seeing that shift in people being more conscious about healthier beverage choices, still enjoying a good cocktail but also not drinking as much overall,” said Genevieve Brazelton. “As we made that choice, some of it is a self-fulfilling prophecy, but it just seemed like we saw the media talking about it too. All signs pointed towards people looking for beverages that are not alcoholic, and also not necessarily functional either.”

In creating the first iteration of Bitters & Soda, Genevieve Brazelton said she took the same similar culinary-inspired approach to making bitters, seeking a balance of flavors that are “layered but still familiar.” She described the Aromatic flavor as her take on Angostura, one of the most historically popular and recognizable bitters on the market; think notes of cinnamon, dried cherries, ginger and sarsaparilla. Though she emphasized it as a standalone RTD product, Aromatic has a natural flavor versatility that also pairs well with food and works as a mixer, she said.

“When people taste our Bitters & Soda, there’s something very familiar — they think about Christmas, they think about root beer because of the sarsaparilla, they love that it’s warm and comforting because of the baking spices,” she said. “There’s a lot going on but it’s all still very familiar, and they can immediately imagine it being something they can drink regularly.”

Moving from bottled bitters to a full RTD product represents both new challenges and opportunities for Bitter Housewife as a business. In order to focus on growth, this summer the company sold its cocktail syrups sub-brand RAFT, which it originally purchased in 2016. Dan Brazelton acknowledged the challenge of managing two distinct brands, along with RAFT’s need for a “fairly large expansion” to maintain growth, as factors in the decision. At the same time, introducing an RTD gives the brand a product that will turn significantly faster than bitters and one that can resonate with consumers during more use occasions.

Other priorities include streamlining the backend of its direct-to-consumer technology and becoming “hyper-efficient” with fulfillment, Dan Brazelton said. To address the latter, the company will sacrifice some of its margins by offering a flat $10 rate for all shipping, and will self-distribute product to to local accounts in Portland while developing partnerships with other craft food distributors and manufacturers to address fulfillment long-term. Dan Brazelton explained that the company’s foundations as a primarily retail brand brings relationships with distributors and importers across a range of channels, giving Bitters & Soda flexibility in its route to market. Along with specialty grocers, the brand is also targeting bars, restaurants, yoga studios and other outlets.

“So much of RTD beverage is the cost of logistics, but there is a lot of white space for a niche product to find a different route to the customer,” he said. “We have this broad breadth of how to get to market, and I think what you have to do is look at a lot of different channels and really optimize for each one.”

When it does arrive on store shelves next month, Bitters & Soda will be the latest in a small-but-growing category of non-alcoholic sparkling bitters. New York-based Hella Cocktail Co. debuted its two-SKU ready-to-drink bitters line earlier this summer, while others like Bitter Love and Sparkling Bitters are also in the space. Assuming that consumers are receptive to Aromatic, Bitter Housewife plans to further expand the line with flavors like orange, cardamom and grapefruit.

Dan and Genevieve Brazelton said seeing other brands enter the market affirms their belief in their product, and in the broader potential for The Bitter Housewife as a beverage maker.

“We’re not here to show off, and I think that has been more attractive to the person who just wants to have a pleasant drink, who doesn’t care about the history or the tradition [of bitters], or about showboating in front of their friends. They just want to make a great drink,” said Dan Brazelton. “That’s going to be our approach going forward as a beverage company. We’re going to make drinks that we like, that we want to drink, that are pleasant and balanced and all natural. Where that will take us, we don’t know.”