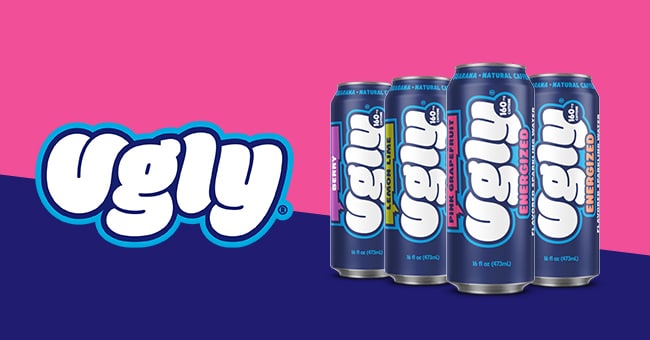 A little over one year after launching in the U.S., London-based sparkling water brand Ugly Drinks is targeting further stateside expansion with the launch of a caffeine-infused sub-line, Energized, along with the announcement of a new round of financing.

The company, which markets zero-calorie flavored sparkling waters, has introduced Energized exclusively as a U.S. direct-to-consumer product available in 16 oz. cans through its website. The four-SKU line — available in Peach, Lemon Lime, Berry and Pink Grapefruit varieties — is sold in 12-pack cases for $49.99 each, or $44.99 for a monthly subscription. Each can contains 160 mg of natural caffeine sourced from a blend of ginseng and guarana, as well as B vitamins.

Speaking with BevNET earlier today, Ugly Drinks co-founder and CEO Hugh Thomas said that the concept for Energized was born out of consumer feedback and sets the brand on a path towards evolution into a “healthier drink platform.” In launching a caffeinated zero-calorie sparkling water, Ugly joins the ranks of Sparkling Ice, Limitless, Phocus, Caribou Coffee and others competing in this growing sub-category.

“We feel that with Ugly we’ve built a brand that consumers really relate to, so we’re seeing them interact with us online and help with new innovation,” he said. “We feel like the brand we’ve created has a genuine personality in terms of being a healthy beverage, but without being too preachy in that sense. It allows us to play in multiple categories.”

The company also announced it has closed a new funding round, which Thomas said will go towards supporting Ugly’s rollout of Energized, as well as building sales and marketing infrastructure in the U.S. and Europe. The company did not disclose terms of the deal, other than referring to it as a “multi-million dollar financing round” in a press release.

Of this round’s two leaders, London-based Pentland Ventures, a global brand management company, is an existing investor, while Steadman Partners, which is owned by Martin Dickie, founder of UK brewery and pub chain BrewDog, is new. Thomas said that “a few other” new investors will be announced early next year.

“Pentland, who’ve been supporters of Ugly for a long time, are well versed in building global brands. They’ve been believers in Ugly really since day one,” he said. “It goes without saying that BrewDog is a business that we’ve always looked up to. Martin [Dickie] has been a follower of the brand for a while; they’ve built one of the most rebellious British-founded drinks companies. We’ll be learning from them both as we take the brand into new places and new markets, as well as different categories.”

Founded in 2015 by Thomas and Joe Benn, both former Vita Coco brand managers in the U.K., Ugly launched in the U.S. last summer and is currently sold in over 10,000 locations worldwide. The brand has thus far focused on forming partnerships with Northeast distributors, including Rainforest in New York City, and is now beginning to expand to other regions, recently signing on with Ajax Turner Co. in Tennessee.

“We’ve always felt that Ugly had the potential for mainstream appeal,” Thomas said. “(Energized) has exactly the same message that we put out there with (the sparkling water) — we are not positioning ourselves as a traditional sparkling water brand. We are very much a fun, exciting, healthy alternative to soda, and that’s what we are seeing consumers excited about and relate to, and that was always the mission of the business: to create something that really brought in consumers of all ages. We are taking on our incumbents with our messaging in the soda space, but now in the energy space as well.”