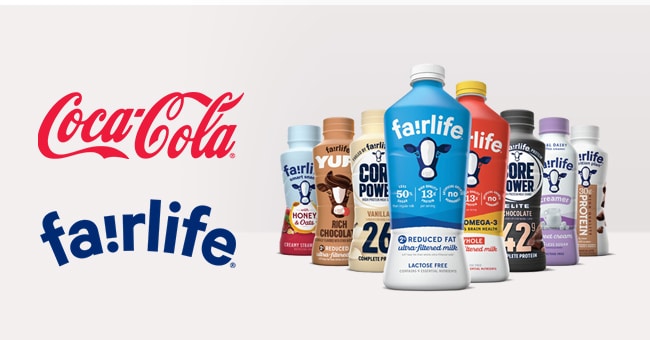 The Coca-Cola Company has acquired the remaining stake in dairy producer Fairlife LLC, the company announced on January 3. The soda giant had been a minority investor in Chicago-based Fairlife since 2012, holding a 42.5% stake in the brand through a joint venture partnership with Select Dairy Producers.

“We are excited for the next chapter of fairlife’s growth and innovation and look forward to continuing to work with our partners across the Coca-Cola system to meet fast-changing consumer needs in a vibrant category,” Fairlife CEO Tim Doelman said in a statement. The company will continue to operate out of Chicago as a standalone business.

Launched in 2012, Fairlife is best known for its value added dairy products including Fairlife ultra-filtered milks, Fairlife YUP! flavored milks and CORE Power protein shakes. Coca-Cola initially partnered with Select Dairy Producers in 2012 to distribute Athletes HoneyMilk, which was later rebranded and relaunched as CORE Power. The brand is distributed in the U.S. through Coca-Cola’s bottling network and the Minute Maid distribution system.

“Fairlife is a great example of how we’re continually expanding our total beverage portfolio to bring people more of the brands they love,” said Jim Dinkins, president of Coca-Cola North America. “This agreement will help ensure that we continue to build on fairlife’s innovative history by combining their entrepreneurial spirit and innovation capabilities with the resources, reach and expertise of Coca-Cola.”

Coca-Cola’s full acquisition of Fairlife indicates that, despite a struggling market, dairy remains a strong focus for the company as it continues to expand its portfolio beyond carbonated soft drinks. The dairy producer surpassed $500 million in retail sales last year, according to Nielsen data cited by Coca-Cola, and has production facilities in Michigan and Texas, with a third currently under construction in Goodyear, Arizona.

In a Q&A on the company’s website, Doelman noted that, in the wake of the video’s release, Coca-Cola has taken steps to address the issue, including conducting an independent investigation and the creation of the Fairlife Animal Welfare Advisory Council.

“We’re working with our supplying farmers across the United States to outline more detailed animal welfare policies and protocols for any farm supplying fairlife,” Doelman said. “We’re investing with and in our farmers to ensure the most up-to-date animal welfare practices are encouraged and rewarded. And we continue to require that every farm in our supply chain is subject to regular third-party unannounced audits with clear action plans for learning and improvement after each audit.”