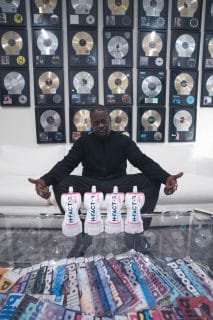 Poo Bear has written and produced for many of the music industry giants, including Justin Bieber, Ed Sheeran and Dan & Shay. Most recently, Poo Bear was the executive producer and co-writer for Justin Bieber’s newly released album “Chances,” including the number one hit, Yummy.

Poo Bear sought out HFactor founder, Gail Levy, after he drank the hydrogen infused water for almost a year and experienced an array of personal health benefits.

HFactor launched at retail in May 2017 and, in that time, has experienced double-digit revenue growth and has dramatically increased its retail foot with activations in retailers such as Albertsons, Safeway, Walmart, Wegmans, Giant, Sprouts, Gelsons, Erewhon and Amazon.

Poo Bear now joins other notable investors, including Dallas Cowboys defensive superstar DeMarcus Lawrence, who invested early on in the brand. HFactor has a long list of celebrities and athletes that use and love the brand.

“I have been an avid fan and consumer for some time. I came to the conclusion that I really wanted to be a part of this product and the culture that surrounds it,” says Poo Bear.  “I reached out through my network to arrange a meeting with the founder. This is one of the most exciting things that I have embarked on in quite some time. I am looking forward to contributing and growing with this amazing brand and team.”

Recently, HFactor launched four natural flavors: Watermelon, Blood Orange, Honeydew and Tart Cherry, with no sugar or calories as well as a larger 20 ounce size. And, the brand partnered up with TerraCycle to set up a program to fully recycle their pouches into useful products like park benches and picnic tables.

Poo Bear will be joining the HFactor team at the biggest industry natural food show, Expo West, on March 4th in the North Hall Booth 639.

There are over 1500 published papers on the benefits of molecular hydrogen in health and wellness. Hydrogen is a brilliant antioxidant proven to reduce inflammation and increase athletic performance.

Created by its Founder, Gail Levy, a serial entrepreneur and mentor.  Gail along with select industry subject matter experts in health and wellness, beverage and distribution successfully took this revolutionary product to market in 2017.  HFactor® is naturally infused with pure hydrogen to provide refreshing hydration plus therapeutic benefits for fitness, health and lifestyle recovery. It comes in a carry-anywhere (BPA free) pouch that optimizes the integrity and pureness of its hydrogen content. HFactor® water is sourced and packaged in the United States and is available online and in stores nationwide. For more information visit: HFactorWater.com