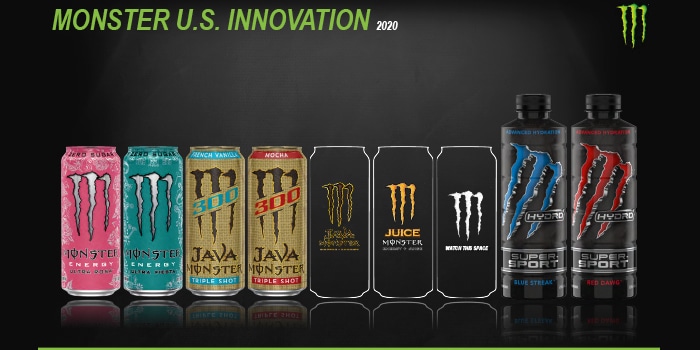 During its annual investor call on Thursday, Monster Energy Corp. reported solid overall sales growth, while teasing several new innovations for this year that are set to directly compete with energy products from Starbucks and Celsius.

Monster also shared an early look at several new innovations set to roll out over the course of this year. In response to the launch of Starbucks Triple Shot earlier this year, the brand will release Java Monster 300, containing 300 mg of caffeine (compared to 200 mg in the core line) and available in two flavors, Triple Shot and Mocha. According to data shared by the company, Monster retains 51.6% of energy coffee category dollar share in convenience channel, compared to 45.9% for Starbucks via its RTD partnership with PepsiCo.

Like Java Monster, the brand’s sports-focused energy water, Hydro, will also spin off a new sub-line, in this case called Hydro Super Sport. The line contains more electrolytes and caffeine than the original Hydro, plus branch chain amino acids (BCAAs). Sacks said the product, which is packaged in a resealable bottle, offers similar functionality to Reign, Monster’s “performance energy” sub-brand, but in a non-carbonated format that’s more appropriate for consumption before, during and after exercise. 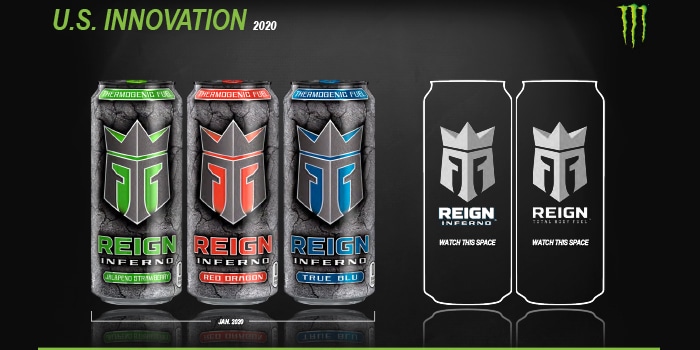 Reign itself is also set to grow from nine to 12 SKUs in 2020. This month, the brand will introduce Reign Inferno, a three-SKU sub-line pitched as “thermogenic fuel.” Details were scant on the product, though packaging indicates some similarities with Celsius Heat, another thermogenic energy drink which contains L-citrulline. But the varieties — Jalapeño Strawberry, Red Dragon and Tru Blu — also suggest a unique flavor positioning relative to Monster’s other products.

The company also took time on the call to address questions around allocation of shelf-space. Monster Beverage Corp. CEO Rodney Sacks said he was confident that performance energy drinks — a group that includes Celsius, C4, A-Shoc and Reign’s chief rival Bang — will continue to grow incremental to the category and will command additional shelf space from retailers this year. Ideally, opening up more Reign facings will allow for the return of some real estate back to the core Monster line that was sacrificed to accommodate Reign’s off-cycle launch. Those conditions, Sacks said, “didn’t let us get Reign out as fully as we would have liked,” though that will be a priority for Monster this year.

“I think it’s important that we try and communicate to consumers that we have a very brand range of product and we are going to take steps this year to allocate marketing dollars to the individual product families that we have,” he said.

Monster is also preparing for the U.S. launch of Coca-Cola Energy this month. The energy drink brand, which recently completed a shift in distribution from DSD to Coke’s national bottler network, challenged the soda giant’s right to enter the category in the U.S., which was eventually settled through mediation in Coke’s favor. Sacks noted that, unlike in other countries, U.S. retailers have mandated that Coke’s line be merchandised in or adjacent to carbonated soft drinks. Only Kroger has agreed to place the product in its energy set, he said.

“Coca-Cola has a very specific objective — they want to see themselves positioned next to Red Bull, not next to Monster,” he said. “They see the products as being incremental to the category and not something that will take space away and share away from Monster.”

Sacks indicated that Monster will continue to work with Coke bottlers to avoid any overlap that “could cause angst to any one side of the equation,” but noted that the brand needs to “protect our own space” and “can’t have a joint approach” with the soda company.

“They are going to go out and get whatever shelf space they want and they’ll respect our shelf space and we’ll do likewise,” he said. “The dilution is maybe in the coolers where you have limited amount of shelf space. The coolers can’t expand — there are only so many SKUs. That’s where there is compression and competition. What goes in and what goes out?” Is it a reduction of Monster of another brand?”