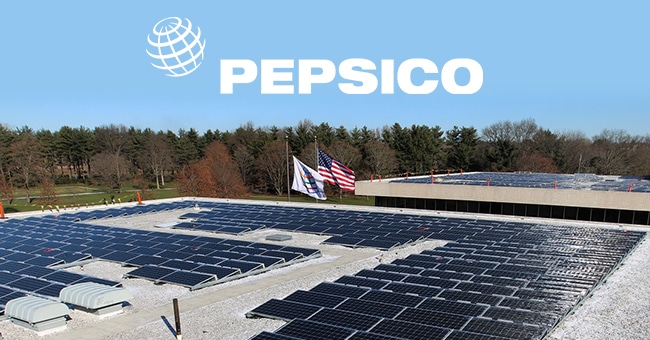 PepsiCo’s U.S. Operations To Be Powered by 100% Renewable Electricity

PepsiCo is on track to achieve 100% renewable electricity for its direct U.S. operations this year as part of the company’s push to cut its global emissions by 20%, Fast Company reported last week. The company’s U.S. manufacturing sites comprise half of its global electricity consumption.

The food and beverage giant currently uses renewable energy in the form of solar and wind power at seven of its U.S. manufacturing sites and will cover the rest of its electricity use with renewable energy certificates, credits which support green energy generation at its other sites. The company will also create Power Purchase Agreements and Virtual Power Purchase Agreements to fund the development of wind and solar farms.

“We see ourselves very much having a big responsibility to play in mitigating the impacts of climate change,” Simon Lowden, chief sustainability officer at PepsiCo, told the outlet. “That means everything throughout the value chain, from how we source and grow crops to how we distribute, what our go-to-market system looks like, and our operations and how we manufacture in the context of energy.”

Fast Company noted that converting to renewable energy use has been a long ongoing process for Pepsi, which first started installing solar panels at its facilities more than a decade ago.

The company’s direct U.S. operations only account for 8% of its carbon footprint, the outlet noted, with agriculture compromising 25% and packaging 26%. In October, PepsiCo, along with The Coca-Cola Company and Keurig Dr Pepper, launched Every Bottle Back, an initiative intended to improve the circular plastics economy and raise awareness about recycling.

“The full value chain needs to be impacted,” he said. “I think it’s a responsibility of manufacturers like ourselves to walk the talk and make sure we’re demonstrating the right thing, be proficient in that, and then start putting pressure down the line that we expect suppliers and industry at large to change in a similar fashion.”

In an effort to address California’s decreasing bottle and can recycling rates, local lawmakers have proposed a bill that would require beverage distributors to create a bottle and can stewardship system to take back their containers, KTLA reported last week. The bill passed the state senate’s Environmental Quality Committee last week and has moved onto its Committee on Appropriations.

If passed, the Beverage Container Recycling Act of 2020 will require beverage makers to produce their own recycling programs by 2024. Democratic Sen. Bob Wieckowski of Fremont, California told the outlet that the state’s current recycling system is “antiquated” and that the new bill will “turn it over to private business.” A similar program has been instituted in Oregon, with legislative analysts claiming the state’s redemption rates have since increased.

California is one of 10 states that offer paid bottle redemption programs. However, in recent years the Golden State has seen redemption rates decrease following the closure of several recycling centers.

In an evaluation of 50 recycling programs, consumer advocacy group Consumer Watchdog named California’s program the “most inconvenient” and recommended retailers utilize “reverse vending machines” for consumers to return bottles in exchange for money or store credit.

“America’s beverage companies and local California bottlers share the goal of improving the recycling and reuse of plastic in California,” he said.

California Beer & Beverage Distributors, the Institute of Scrap Recycling Industries and Protect CRV (California Refund Value) have expressed opposition to the measure, with the latter telling KTLA that, while it supports turning responsibility over to the beverage industry, change may not come soon enough to save recycling centers from shutting down. 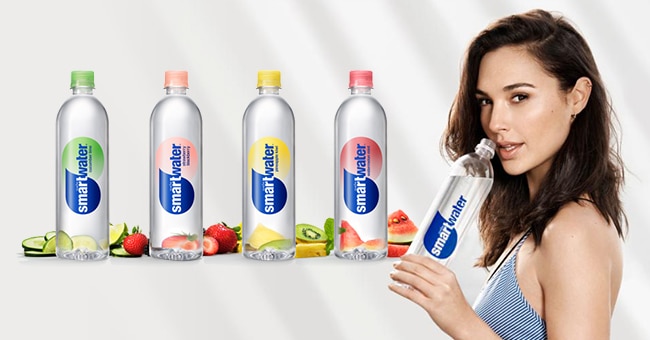 Smartwater has launched its largest marketing campaign to date in partnering with “Wonder Woman” actress Gal Gadot to support its new flavored waters rolling out this year, according to AdAge.

Celina Li, VP of water for Coca-Cola North America, told the outlet that 2020 is the “biggest year” for the brand since its debut in 1996. She said that Gadot, who stars in new 30-second and 15-second ads, will now serve as the “face of the brand” in Smartwater’s marketing throughout the year. The new partnership comes after last year’s campaign with basketball player Ben Simmons to promote its antioxidant and alkaline water lines.

Mike McGarry, the group director of Integrated Marketing Content for Coca-Cola’s still beverage portfolio, told the outlet that Smartwater will air its first television commercial later this year, and in the meantime will promote both its new and established lines through various forms of marketing throughout the year, including experiential, social and digital.

The lounge’s menu includes “func-tails,” mixed drinks made with functional ingredients, such as its “Heart Beet” drink made with beet powder, hawthorn berry and Ablis’ Cranberry Blood Orange CBD soda. The lounge also offers its portfolio of CBD beverages on tap and in bottles, along with beer, coffee, tea and CBD-infused topicals.

“This idea of the func-tail has been a long time in the making,” said Ablis founder and CEO Jim Bendis in a press release. “Our goal at Ablis Experience is to allow diners to taste the many flavors offered on our menu with ingredients that provide health benefits beyond normal nutrition.”