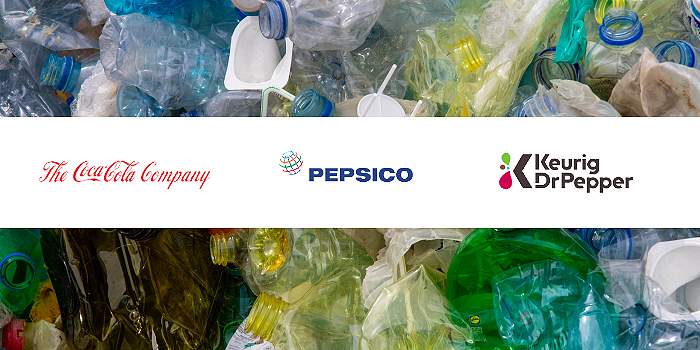 At a press conference earlier today, The Coca-Cola Company, Keurig Dr Pepper and PepsiCo announced the launch of Every Bottle Back, a sustainability initiative in conjunction with World Wildlife Fund (WWF), The Recycling Partnership and Closed Loop Partners. The new initiative, spearheaded by the industry trade group American Beverage Association (ABA), is intended to improve the circular plastics economy and raise consumer awareness about the importance of recycling plastic bottles.

Every Bottle Back aims to inspire action for consumers to recycle bottles made with polyethylene terephthalate, or PET, a lightweight, 100% recyclable plastic. The program’s primary goal is to increase the volume of plastic bottles reclaimed and remade into new PET bottles or other items such as clothing, playground equipment and carpets, reducing the amount of new or “virgin” plastic introduced into the environment.

The three beverage companies have committed to investing $100 million to improve recycling infrastructure, including enhancing the process of sorting, processing and collecting used plastic bottles. Through additional grants and investors, they will be collectively directing $400 million to environmental nonprofit The Recycling Partnership and Closed Loop Partners, an investment firm focused on establishing a circular economy. According to the ABA, the Recycling Partnership has improved recycling in 50 million households to date.

These funds will be used to improve the quality and availability of recycled plastic, increasing access to better community recycling programs and making it easier to recycle in public spaces. According to Katherine Lugar, president of the American Beverage Association, Every Bottle Back will focus on “key” regions of the country with the “biggest infrastructure gaps,” including Texas, Northeast, Midwest and Southeast.

The partnership with WWF will allow Coke, Pepsi and KDP to track their progress in reducing their collective plastic footprint using its accounting system ReSource: Plastic. The new initiative is part of the organization’s “No Plastic in Nature by 2030” goal.

“Reaching our goal of No Plastic in Nature by 2030 will only happen if business, governments and the NGO community work together to fix a broken plastic material system,” said Sheila Bonini, WWF’s senior vice president of private sector engagement. “ABA is driving this sense of collaboration within the beverage industry to address one critical piece within this system, which is PET recycling in the U.S.”

Bonini also noted in the press conference that “as few as 100 companies have the potential to prevent approximately 10 million metric tons of plastic waste entering nature.”

The companies will also be adjusting their product packaging by adding a message to highlight their 100% recyclability, a transition to be completed by late 2020. The initiative will be accompanied by a public awareness campaign intended to illustrate the importance of reclaiming 100% recyclable bottles for reuse.

The Every Bottle Back initiative unites the three competing beverage giants’ under a common goal while supporting their individual previously announced sustainability efforts and commitments to improving their plastic packaging.

“We’re proud to come together with our competitors to address the serious issue of plastic waste in our environment,” said Jim Dinkins, president, Coca-Cola North America. “We know we cannot do this alone and, in order to meet our goals and those of our industry, we need to work in partnership to drive collective action to ensure our bottles have second, third and fourth lives through continued recycling and re-use.”