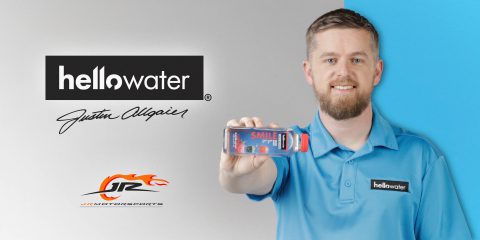 MOORESVILLE, N.C. – JR Motorsports announced today that hellowater will partner with Justin Allgaier and the JRM No. 7 team for the 2021 NASCAR Xfinity Series season. hellowater, born in Chicago, Ill., will serve as the primary sponsor on Allgaier’s Camaro for the July 10 race at Atlanta Motor Speedway as well as Watkins Glen International on August 7.

hellowater is part of Hello Beverages, LLC, a manufacturer of enhanced functional waters, and is designed to deliver quality wellness benefits in digestive health, immune defense, and pH balance. This marks the first time that the beverage company has partnered with a NASCAR team.

“We are beyond excited for the opportunity to partner with JR Motorsports to bring hellowater to the world of NASCAR,” said Rusty Jones, co-founder and chief strategy officer of Hello Beverages. “Hydration is key for peak performance and Justin and the No. 7 team will have hellowater products stocked throughout the season fueling their quest for a championship.”

In addition to its partnership with JR Motorsports, hellowater is also linked to Allgaier’s longtime primary sponsor BRANDT. The two companies recently joined forces to launch a patented immune defense technology branded CYTO PLUS™. In addition to hellowater’s two primary races, the company’s logo will be featured on the decklid for BRANDT’s primary races in 2021.

Allgaier, JR Motorsports’ winningest driver, is entering his sixth season with the organization after a strong 2020 championship campaign that culminated in a career-best runner-up finish in the NASCAR Xfinity Series driver standings. In addition to earning his second consecutive NXS Most Popular Driver Award at the end of 2020, Allgaier capped off last season with three victories, 11 top fives, 19 top 10s, and led a staggering 1,008 laps on the year. The veteran driver has 11 wins since joining the team in 2016 and 14 career NXS victories in 339 starts.

“I’m really looking forward to having hellowater as a partner for the 2021 season,” said Allgaier. “I was hooked the first time I tried their line of fiber-infused, prebiotic water last year and can’t wait to have their colors on our Chevrolet at Atlanta and Watkins Glen. I’ve gotten a preview of the paint scheme and it looks fast. Hopefully we can end the day celebrating with hellowater in Victory Lane.”

Additional details on the partnership, including the unveil of the No. 7 hellowater Camaro will be announced at a later date.

Hello Beverages LLC, born in Chicago, IL., is a manufacturer of enhanced functional waters. The company was co-founded in 2016 by beverage industry veterans and innovators Tom Bushkie and Rusty Jones. hellowater includes three functional varieties, each designed to deliver quality wellness benefits in digestive health, immune defense, and pH balance. hellowater was born with the mission to INSPIRE. HEALTH. It meets the needs of people with active lifestyles who are looking to make good choices that will positively impact their health. For more information about hellowater, visit www.hellowater.com

JR Motorsports is the management company and racing operation for Dale Earnhardt Jr., NASCAR’s 15-time Most Popular Driver and winner of 50 NASCAR-sanctioned races. Now in its 20th year of overall competition, JR Motorsports races in multiple divisions, including the NASCAR Xfinity Series where it won championships in 2014, 2017 and 2018. The company also competes in Late Model competition and owns five championships in regional late model divisions. To learn more about the organization, its drivers and its sponsorship opportunities, visit www.jrmracing.com.