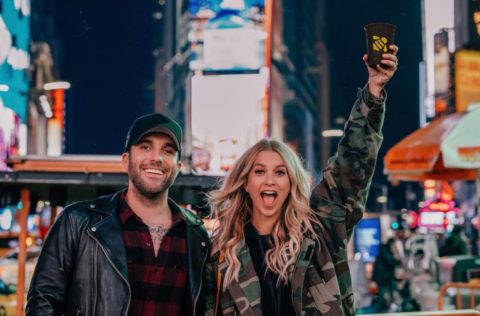 Gadecki and Rich were introduced to Honeydrop in 2018 by longtime friend Lane Cheek, President of the Honeydrop Media Group and they became immediate fans of the products.  This led to an exploration of how to work together to expand the Honeydrop brand across the entertainment media space. “I’m beyond thrilled to welcome Sabina & Tyler to Honeydrop and for the endless creative opportunities we can produce together. They are extremely talented & hard-working individuals who perfectly embody the fun & active spirit of the brand we are building. Getting to work with people I consider family is just the cherry on top,” said Cheek. The partnership comes at a time when Honeydrop is evolving into something new coming out of the pandemic – the company has expanded its internal team as well as introduced new categories in order to offer consumers even more ways to reap the amazing health benefits of raw domestic and Manuka honey, including future beverage lines as well as topical beauty products and wellness supplements.

“For generations, active vocalists & entertainers have used the benefits of raw honey as a secret weapon to keep their voices strong and promote a healthy immune system. We are beyond grateful to have Sabina & Tyler as fans of the brand and for all the amazing insight & support they will provide as advisors to our team going forward.” said Honeydrop CEO Andrew Lorig.  As strategic advisors in Honeydrop, Gadecki and Rich will be deeply involved in brand strategy and the expansion of the company to new markets, advising on product conception and the development of high impact experiential activations.

“We feel incredibly lucky to become partners in such an amazing company and even better people to create alongside. It’s rare you find a product as great as Honeydrop, that supports a cause beyond its own with every purchase. Animal rescue has always been a huge passion of ours so knowing Honeydrop helps save our bees is really important. Through our initiative “Rich Rescues”, we raise awareness of animals in need, with tour stops.  So, now we can add bees to the list along all those dogs and cats! We are thrilled to be a part of Honeydrop!” Said Rich and Gadecki.

Sabina Gadecki is an American actor and model who has had major recurring roles and appeared in TV shows such as L.A.’s Finest, Narcos, The Affair and House of Lies.  She has also appeared in films like Entourage & False Positive. Sabina studied International Business & Communication at Fordham University while pursuing a career in modeling and acting in New York City. Tyler Rich is an American country music singer from California signed to Big Machine Record’s The Valory Music Co. His debut album TWO THOUSAND MILES features GOLD-certified “The Difference,” plus Tyler most recently released “Better Than You’re Used To” and “A Little Bit Of You” is out November 12.  The couple was married, September 2019 at a Festival themed wedding in Tennessee, reminiscent of their initial meeting at Stagecoach.

Honeydrop is an active lifestyle brand made with the highest quality ingredients with the goal of supporting your healthy lifestyle while trying to leave the planet a better place than how we found it. Honeydrop’s cold-pressed lemonades are never heated, made with just a drop of raw honey, and contain just 4g of sugar & 16 calories per bottle. Honeydrop has also recently launched a new line of Manuka Honey infused lip balms this fall with plans of more product expansions in coming months. Additionally, we support our most important friends, the honey bee, by providing a portion of proceeds from every product purchased to our friends at Honeylove.org to help SAVE THE BEES.