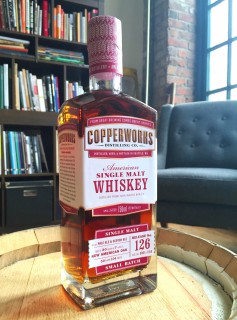 SEATTLE – August 16, 2016 – Calling all whiskey aficionados! Copperworks Distilling Company, distiller of small-batch spirits on Seattle’s downtown waterfront, is thrilled to announce the first Copperworks American Single Malt Whiskey is matured to perfection and will be released on August 27, 2016.

Copperworks Whiskey is a distinctive entrant to the newly emerging category of American Single Malt Whiskey. Copperworks Whiskey Release 001 is made from a high-quality craft beer brewed from 100 percent pale malted barley which is twice-distilled in traditional copper pot stills. These stills were hand-hammered in the highlands of Scotland and designed specifically for making malt whiskey.

As passionate, experienced brewers, Copperworks co-founders Jason Parker and Micah Nutt have partnered with local breweries Pike Brewing Company and Elysian Brewing Company to brew the craft beer used in their whiskey. The beer used for Release 001 was brewed at the Elysian Brewery. Parker and Nutt then fermented the beer at the distillery using a fresh brewer’s yeast to get the best possible flavor.

“From the very beginning, our plan has been to use our brewing backgrounds to produce an exquisite whiskey in the newly emerging category of American single malt whiskey,” said Jason Parker. “This goal has now come to fruition with Release 001, a whiskey based on the malty sweetness and complexity derived from beer,” said Micah Nutt.

Copperworks Whiskey Release 001 has a soft honey and black tea aroma, smooth mouthfeel, and flavors of smoked orange and toffee, giving way to black pepper and leather. Bottled at 104 proof, it is delicious sipped neat and used in classic and modern whiskey cocktails.

Unlike most distillers in the U.S., Copperworks distills its whiskey twice, using two different copper pot stills. “Distilling the whiskey twice enables us to collect more of the beer and malt flavors we want and we’re able to eliminate more of the undesirable flavors in the wash than a single distillation would allow,” said Micah Nutt.

Release 001 matured for 30 months at Copperworks in full-size charred, new American Oak barrels handmade in Louisville, Kentucky. Under carefully controlled conditions, these top-quality oak barrels produce a balance of flavors from the malt, yeast, and oak. “We create a balance of flavors in our whiskey by matching the malt recipe, yeast selection, and distillation profile with the right cask type, entry proof, and warehouse conditions,” said Parker.

Availability: Release 001 will initially be available for sale only in Copperworks tasting room. 1,005 limited-edition signed bottles are available. Future releases will be available in the Copperworks Online Store and in select liquor and grocery stores in the Puget Sound area.

For a limited time, Copperworks is continuing to reserve bottles of Release 001 for whiskey lovers. Customers who buy a Copperworks Gift Card worth at least $75 will get a Copper Ticket that reserves one bottle of Release 001. For more details, go to www.copperworksdistilling.com/reserve-bottle-bat

Opened in 2013, Copperworks Distilling Company is a distillery, tasting room and retail store located on Seattle’s downtown waterfront. Blending traditional methods with innovation and the unexpected, Copperworks produces American Single Malt Whiskey, a series of gins, and vodka, all made from malted barley. The company’s owners/distillers are experienced craft beer makers who are further exploring the possibilities of malted barley by distilling high-quality craft beer into fine spirits. Jason Parker was the first brewer at Pike Brewing Company, worked at Redhook Brewery, and worked as Brewmaster at Pyramid Brewing for six years. Micah Nutt is an experienced and talented home brewer. For more information, visitwww.CopperworksDistilling.com and connect with Copperworks on Facebook, Twitter andInstagram.