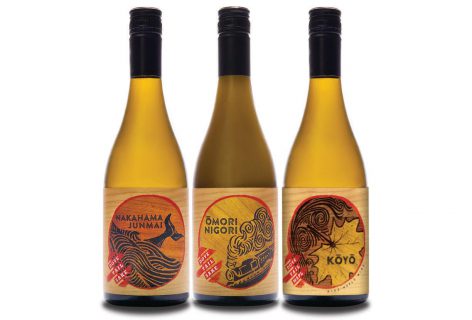 Boston, MA (November 21, 2016) – Dovetail Sake, Massachusetts’ premier and only sake brewery, and DRINKmaple, producers of pure maple water tapped from trees in Vermont, have joined forces to create an exciting innovation: the first maple water sake on the market. Named Kōyō, the Japanese word signifying the autumnal change in season, this premium sake is made with 100% US grown Yamada Nishiki rice, hand-grown Koji, Japanese yeast and, in a unique twist, maple water.

“Since Dan and I both grew up in New England, we were always aware of the large variety of maple products. Ever since I discovered DRINKmaple, I’ve been eager to create a Sake with this natural ingredient,” said Todd Bellomy, co-founder of Dovetail Sake. “I stumbled upon DRINKmaple and immediately knew we wanted to partner with this local product. The team not only shares our New England roots, but our mission to source only the highest quality ingredients and produce a premium, hand-made product.”

“We are so excited to be collaborating with Dovetail Sake,” said Kate Weiler, co-founder of DRINKmaple. “We hold a strong commitment to supporting local brands and when we met the guys at Dovetail, the partnership was a no-brainer. They are doing something totally unique, mirroring our own values of innovating the beverage space – one that has been stagnant for a while.”

DRINKmaple organic maple water is the pure, refreshing water collected from Vermont maple trees in the spring. The single-ingredient beverage – which is bottled and sold in more than 5,000 stores across the country – boasts a slew of naturally occurring minerals and sugars that, when added to the fermentation process of sake brewing, enhance the flavor in a delectably complex way. It offers a subtle maple sweetness, as well as a woody complexity that rounds out the slightly fruity yet spicy flavor of high-quality sake that’s been perfected by Dovetail.

The third of Dovetail Sake’s small batch creations, Kōyō will be available in stores and restaurants throughout Boston prior to Thanksgiving, November 24. Patrons of hotspot O-Ya will be happy to find Kōyō on the menu, among other restaurants in the city. Craft Beer Cellar, Gordon’s Fine Wines and Liquors, and many other specialty liquor stores will be selling Kōyō at an MSRP of $28 per 500ml bottle.

Dovetail Sake is a New England Sake brand based in Waltham, Massachusetts, with a vision to produce high-quality Sake in small batches using the finest ingredients. For this reason, each batch is created using American-grown Yamada Nishiki rice, Japanese yeast strains, and Koji grown in-house. This all-handmade approach allows them the greatest control to make the most delicious Sake. Co-founder and owner, Daniel Krupp is a Newton, Massachusetts native, culinary school graduate, and an alum of the SEC’s Certified Sake Professional certification program (Japan, 2010). Todd Bellomy, co-founder and brewer, lived in Japan for several years, worked in the American craft beer industry for 8 years, and studied in Japanese Sake breweries.

Founded by two New England natives in May 2014, DRINKmaple is the producer of the nation’s #1 selling organic maple water. Maple water is the sap that comes straight from maple trees. It is a natural hydration that boasts a subtle hint of maple flavor. Containing 46 naturally occurring vitamins, minerals, polyphenols, antioxidants and prebiotics, the refreshing beverage is naturally low in calories, gluten-free, dairy-free, organic, vegan and non-GMO. The sap is obtained by sustainably tapping the trunks of American-grown maple trees on USDA-certified organic family-run farms in Vermont. Once harvested, DRINKmaple sets the industry standard, boasting a “tree to bottle” process to preserve the sap’s freshness, quality, taste and nutritional benefits. DRINKmaple is available in more than 5,000 stores across the US, in the UK and Australia.