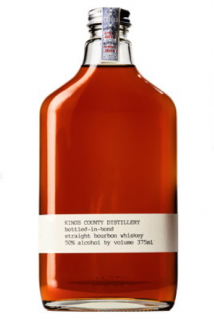 Boston, MA – Kings County Bottled-in-Bond Bourbon was released today for the first time in Massachusetts. Only 24 bottles of the award winning bourbon were allocated to Hub Beverage, the Boston-based distributor of craft spirits. Kings County Bottled-in-Bond Bourbon is now available in just four liquor stores stretching from the North Shore to the Cape.

Kings County is among the very first craft distillers to release what can be considered the highest class of American whiskey. Bottled-in-Bond is a designation created in 1897 for American spirits that are produced by one distillery in one distillation season, aged in a federally bonded warehouse under U.S. government supervision for at least four years, does not contain any additives, and is bottled at 100 proof.

In the old days, this was a way to protect the consumer from adulterated whiskey and brands that were merely bottling whiskey from other distilleries. Adulterated whiskies are less of a problem now, but some brands claiming to be “craft” are sourcing their whiskey from wholesale producers, making Bottled-in-Bond meaningful again.

Kings County Bottled-in-Bond Bourbon is made from a mash bill of 80% New York State organic corn and 20% English malt. It was twice distilled in 26-gallon pot stills and entered new-oak, 15-gallon barrels at 116 proof.

The result is a whiskey robust for its age; even as it compares to older craft and commercial bourbon whiskeys. A pungent nose of corn, hay, and peppery spice gives way to a richly textured flavor with notes of cinnamon, chocolate, and molasses.

In 2013, Kings County co-founders Colin Spoelman and David Haskell published The Kings County Distillery Guide to Urban Moonshining (Abrams), which has since sold more than 50,000 copies. In 2016, they published Dead Distillers: A History of the Upstarts and Outlaws Who Made American Spirits (Abrams, 2016).

Hub Beverage is the first and only liquor distributor in Massachusetts to focus exclusively on craft spirits, and the only one to combine traditional liquor distribution with modern marketing technologies and business development. With a carefully curated portfolio spanning from absinthes to whiskies, Hub Beverage supplies the finest bars and stores with authentic, delicious and unique craft spirits. Hub Beverage was founded by Brian Suthoff in 2016, is based in Boston and distributes across Massachusetts. https://www.hubbeverage.com.