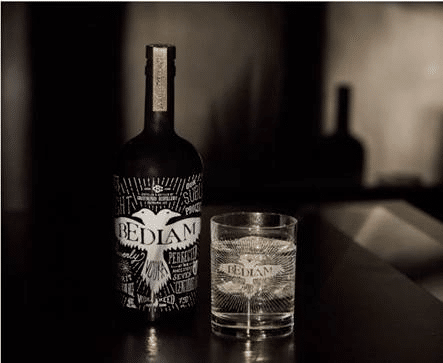 DURHAM, N.C.– In a move to kick start the new year, Bedlam Vodka, an award-winning craft vodka distilled and bottled by Graybeard Distillery, has announced the launch of a new, limited-edition look for the bottle.

The new bottle design features an eye-catching, all-black background and was selected for its ergonomic and mixologist friendly shape. The refreshed design can be seen on bar and store shelves beginning December 2019 and will be available for a limited time.

“Our visual brand is such a key component of who we are at Bedlam Vodka,” said Brandon Evans, CEO of Bedlam Vodka. “This new design is representative of who we are and encapsulates the character of Bedlam, which is unapologetically genuine, bold and incredibly smooth.”

Using a process perfected by the founders’ Irish ancestors over the past seven centuries, Bedlam Vodka is a superior spirit, distilled from rice, that promises a smooth drinking experience. The Bedlam brand name is taken from a rugged coastal town in north western Ireland, where its inhabitants rebelled during British oppression and earned its moniker “Bedlam.” The Bedlam brand has taken on these ancestral roots of living rebelliously and crafted them into a powerful call to go against the grain, broaden one’s horizons, and take part in the world around you.

A Rebellion in Taste 170 years in the making, Bedlam Vodka derives its name from a small community in Ireland. Handcrafted in Durham, NC, Graybeard Distillery uses a family recipe and American-grown long-grain white rice to produce the 100% Grain-to Glass and Gluten-free Bedlam Vodka.

Bedlam Vodka is light on the nose and complex on the palate. Flavorful, smooth, and lacking the burn of traditionally made vodkas, our unique distillation process offers novice and discerning drinkers something to marvel at and enjoy. Live Rebelliously. Drink Responsibly. More information about Bedlam Vodka can be found at bedlamvodka.com.