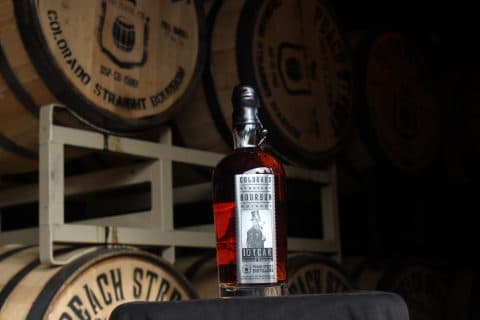 PALISADE, Colo.— Peach Street Distillers is making Colorado history. For the first time ever, the state’s oldest independently owned distillery will release Colorado Straight Bourbon 10 Year Single Barrel, a bourbon that has been quietly resting in a dark corner in Peach Street’s rickhouse since October 2009. Notably, this magic was occurring during a time when distilling was much less popular of an endeavor in the Centennial state.

“Traditionally, longer aged Bourbon Whiskeys are from Kentucky where the humidity and daily shifts in temperature are not so extreme,” says Dustin LeMoine, Bourbon Lobbyist and Director of Sales at Peach Street Distillers. “Our little rickhouse in the Colorado desert sees very dry conditions and temperature swings of up to 40+ degrees per day. This combination draws the bourbon deep into the oak and keeps the spirit in the barrel active—further developing the flavor.”

Peach Street’s Colorado Straight Bourbon is made from sweet Western Colorado corn grown two miles down the road, pure Rocky Mountain water, and rye and barley from Proximity Malt in the San Luis Valley, our 10 Year Expression was aged in American Oak for ten years and bottled from a single barrel. “The result is a bouquet of flavors including cherry, cinnamon, hay, pipe tobacco, caramel and a heavy dose of leather and vanilla on the nose”, according to Head Distiller, Davy Lindig. Peach Street Distillers is proudly local which is why all phases of production— brewing, fermenting, distilling and aging— were done in Palisade, Colorado.

Peach Street Distillers will host a release party for this historic whiskey on Saturday, December 7 starting at noon with a limit of two bottles per person. Retailing at $99.99 per bottle, each whiskey is wax dipped and includes a specialty, hand-tied bead. Limited quantities will also be available at participating retailers early to mid-December, just in time for the holidays.

“There is literally no precedent for a Bourbon of this background or character,” says LeMoine.
“We’re only emptying two single barrels this year so get it while you can!”

Peach Street Distillers was founded in 2005 in the heart of Colorado’s Fruit and Wine region, Palisade Colorado, where the high desert meets the mountains. The warm days and cool nights in Palisade make the local fruits and grains unimaginably delicious. Living the very definition of “craft” we do everything the hard way to turn these fermentable raw materials into extraordinary spirits. Because, this is what we consider fun and what makes for a mighty fine drink. Peach Street Distillers is Colorado’s oldest continuously owned and operated distillery. Visit peachstreetdistillers.com for more about the spirits and the spirits squad.