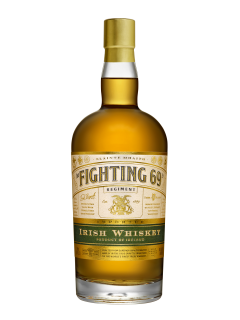 New York, NY – This Veterans Day lovers of good whiskey and patriotic citizens across the Volunteer State can toast the men and women who have served in the United States Armed Forces with an Irish Whiskey named for one of the country’s most storied military units.

The 69th Infantry Regiment’s history dates back to 1849 when it was created as the 9th Regiment New York State Militia. Company “A,” 1 Battalion, 69th Regiment traces its lineage back to the American Revolution. The regiment has seen combat in five wars: the American Civil War, World War I, World War II, the Iraq War, and in Afghanistan.

Since 1851 the officers of the famed 69th Regiment have begun their responsibilities as lead unit in New York City’s St. Patrick’s Day Parade by raising a glass of Irish whiskey in a traditional toast. When they do it for the 171st time in 2021 it will be with a special Irish whiskey named after their own famed infantry regiment.

The Fighting 69th Irish Whiskey was launched late 2019 in New York City and other selected markets. This is among its first appearances in the Southeastern United States.

The Fighting 69th Irish Whiskey is being produced by the Florida-based Espiritus Group, a spirits development and marketing company, in conjunction with the 69th Infantry Regiment Historical Trust, which is a non-profit 501 (c) (3) entity. A portion of the sale of each bottle sold will benefit the trust and support its historic preservation mission as well as philanthropic activities on behalf of the Regiment’s veterans and their families.

Scott Reid, Chief Marketing Officer for Espiritus Group, said that Fighting 69th Irish Whiskey has been remarkably well-received since its introduction and expects that success to continue in Volunteer State.

“The first shipment of Fighting 69th Irish Whiskey sold out shortly after it was launched in late 2019 and we have very high expectations for it in Tennessee given the on-going popularity of Irish Whiskies in general, the sophistication of Tennesseans when it comes to adult beverages and the large population of military veterans in the state,” Reid said.

Describing the taste of the whiskey, Reid noted that it is medium-bodied and bright and lively on the palate with a smooth and complex finish that allows for a delightful experience. “I would describe the whiskey as being very much like the motto of the Fighting 69th Regiment: Gentle when stroked, fierce when provoked,” Reid said.

The 69th Infantry Regiment has a long and storied history. Its wartime exploits have been memorialized in books and popular culture including the 1940 Warner Brothers movie “The Fighting 69th” starring James Cagney and Pat O’Brien. The regiment has seen combat in five wars: the American Civil War, World War I, World War II, the Iraq War, and in Afghanistan. The 69th self-activated on 9/11 in 2001 and was the first military unit to reach the World Trade Center.

About the 69th Infantry Regiment:

The 69th Infantry Regiment is an infantry regiment of the United States Army. It is from New York City, part of the New York Army National Guard. It is known as the “Fighting Sixty-Ninth,” a name said to have been given by Robert E. Lee during the Civil War. An Irish heritage unit, as the citation from poet Joyce Kilmer illustrates, this unit is also nicknamed the “Fighting Irish,” immortalized in Joyce Kilmer’s poem When the 69th Comes Home. Between 1917 and 1992, it was also designated as the 165th Infantry Regiment. It is headquartered at the 69th Regiment Armory on Lexington Avenue in Manhattan.