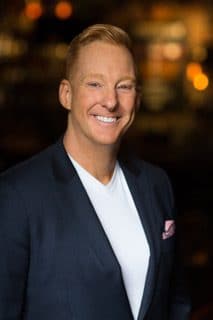 The Cooper Spirits Co. is excited to welcome back Bryan Townsend in the role of Vice President of Sales. Townsend’s appointment signifies the evolution of the Cooper Spirits Co.’s executive leadership team, ushering in the next chapter of the company.

Beloved by the cocktail community, Townsend has almost two decades of experience working with some of the world’s best bartenders and spirits brands. He initially joined the Cooper Spirits Co. in 2009 as the Manager for Texas, Louisiana, New Mexico, and Oklahoma, working alongside the late innovator and visionary, Robert J. Cooper to launch the wildly popular St-Germain Elderflower Liqueur in the U.S. During his tenure with the company, he worked his way up through the ranks to Director of Sales for South and Central Region and eventually to Director of Sales for the United States, Australia and Canada, focusing on St-Germain Elderflower, Créme Yvette liqueur, Slow & Low Rock and Rye, and Lock, Stock and Barrel 13-year Straight Rye Whiskey. Most recently, Townsend served as the Vice President of Sales for The 86 Co. acting as the national liaison between company’s distributors and its on/off premise accounts. He will lead Cooper Spirit’s sales and business development efforts for Cooper Spirits’ portfolio of products, which include Hochstadter’s Slow & Low, Hochstadter’s Vatted Rye, Lock, Stock & Barrel, and more. Further, Townsend will be responsible for identifying, evaluating and driving growth opportunities in national markets, as well as managing Cooper Spirits’ sales force, distribution partnerships and sales strategy.

Townsend’s appointment follows The Cooper Spirit Co.’s most recent hires, Chad Solomon as Director of Trade Advocacy and Innovation and Christy Pope as Marketing Manager. Further, since October 2019, the company has been quietly expanding its marketing team. One of the bigger hires included Andrea Cromaz, Vice President of Marketing. Over the course of her 13-year career, Andrea has worked with well-known companies like SGWS, Diageo, Bacardi, and Heaven Hill activating countless consumer and commercial marketing initiatives. Prior to joining The Cooper Spirits Co., Andrea led the US marketing team for Fratelli Branca, most notably spearheading efforts for Fernet-Branca.

“We’re delighted that Bryan is rejoining the Cooper Spirits family,” said Katie Cooper, Owner of The Cooper Spirits Co. “We’ve been carefully developing our sales and marketing teams over the past year to build upon the foundation that Robert set forth for the brand. I couldn’t think of a better person to take the helm of VP of Sales than Bryan, as I know he has the same passion for the company and products that Robert did and will keep his spirit alive. We’re looking forward to the future and all the exciting things to come.”

“I’m excited to come home to The Cooper Spirits Co. and to be a part of this new chapter,” said Bryan Townsend. “There’s a dynamic marketing and sales team in place, and I’m enthusiastic about the programming we’re looking to implement. The St-Germain Elderflower Liqueur launch was such an integral part of my experience, and I want to take Hochstatder’s Slow & Low Rock and Rye to the same heights while keeping Robert’s legacy alive.”