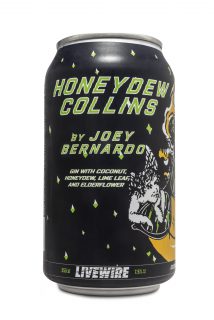 Created in Los Angeles and produced in Ventura, CA, LiveWire Drinks was founded in March 2020 by Polsky, who lives and breathes rock ‘n’ roll and the art of drink making. He works with the world’s best bartenders to create exceptional canned cocktails using the best ingredients. Bernardo is the first bartender collaborator, a colleague and friend from famed LA cocktail bar Harvard and Stone. Honeydew Collins, along with Polsky’s Heartbreaker and Golden God, are already in select specialty shops in Los Angeles, New York, San Francisco and San Diego.

“When trying to create a carbonated canned version of one of Harvard and Stone’s best selling drinks, you have to apply a little rock ‘n’ roll to the process”, says Bernardo. The Honeydew Collins was inspired by the Thai Town neighborhood of Los Angeles where Harvard and Stone is located, and where Bernardo started working in 2011. It reminds him of a summertime drink of shreds of honeydew and sweet milk his mother would make during his childhood in the Philippines.

The next cans coming to Texas at the end of the month are Polsky’s Heartbreaker, a crisp and juicy blend of vodka, oroblanco grapefruit, kumquat, jasmine and ginger, with notes of honey and a bubbly finish; and his Golden God, a sensational 7.5% ABV sparkling concoction of rye whiskey and brandy with green tea, elderflower and apricot flavors.

“A handful of the bartenders on LiveWire have worked in Texas,” says Polsky. “We’re excited to reconnect with the state’s legendary bars and liquor stores once again.”

Created by renowned LA bartender Aaron Polsky, LiveWire Drinks is all about the people, putting the creators of these delicious drinks front and center by making their involvement more than just a recipe, but also the image of the brand and the benefactors of their sales. If bartenders are the new rock stars, then LiveWire is a new record label. Polsky is working with the world’s best bartenders to create exceptional canned cocktails using the best ingredients. Visit LiveWire at LiveWireDrinks.com and follow on IG at @livewiredrinks. Read more about the brand New York Magazine says is “for the Valentine who (finally) moved on from White Claw” at Los Angeles Magazine, Daily Beast, Punch, Wine Enthusiast, KCRW, Eater, Golden State, Alcohol Professor, and Guilty Eats.