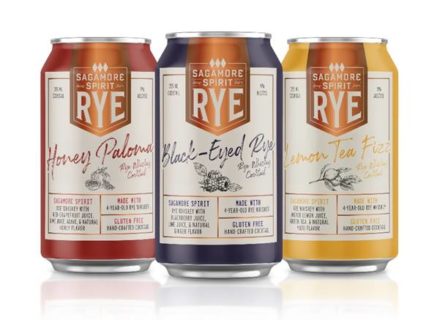 Made with organic juices and naturally gluten-free, Sagamore Spirit’s rye whiskey canned craft cocktails are ready for any occasion:

“Maryland-style rye is the perfect base for cocktails, and we thought it was time to show that you can create a premium canned cocktail with our four-year-old rye whiskey, meant to be enjoyed anytime, anywhere,” said Brian Treacy, Sagamore Spirit president. “What makes these recipes so special is the consideration that went into creating them. In the crowded ready-to-drink space, these stand apart because of the time we took to design each cocktail from scratch with the talented mixologists from CAnE Collective, resulting in a product that is layered with flavor and our award-winning rye whiskey in every sip.”

Sagamore Spirit canned craft cocktails will initially be available throughout Maryland, Washington DC, and New Jersey before becoming available nationwide next year. Each cocktail will be sold in a four-pack at an SRP of $15.99, beginning in August 2021.

Inspired by the legacy of Maryland Rye and today’s spirit consumer, Sagamore Spirit is driven to craft the world’s best Rye Whiskey while strengthening our collective communities. Its award-winning five-acre waterfront distillery in Baltimore is reclaiming the city’s rightful place in America’s whiskey history, where storied distillers perfected rye whiskey for more than 150 years before Kentucky was founded.