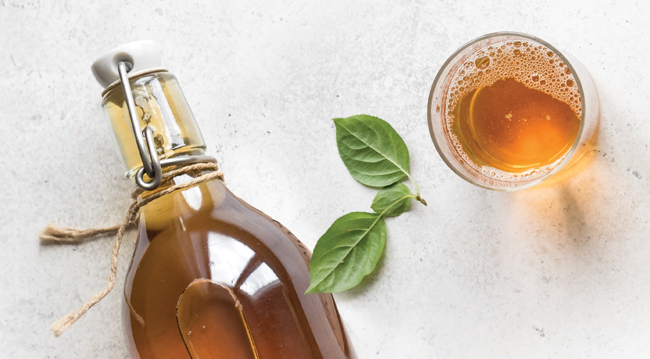 As kombucha continues on the path to becoming a billion dollar category, retailers are continuing to grow their in-store sets to allot more space for the brands making these increasingly popular fermented beverages. However, the mainstream breakout comes at a time of slowing growth: according to market research firm SPINS, kombucha grew 2.4% to $703.2 million for the 52-week period ending July 12, with the strongest growth coming from MULO stores where the category improved 5.9% year-over-year.

Even as the category rises in MULO, sales in kombucha’s native natural channel were down 6.5%. According to Humm Kombucha CEO Jamie Danek, kombucha makers understand that “if we really want this category to grow, we have to think outside the box and make it so more people can have access to the product.” So, as the category spills out into the mainstream, it’s also beginning to spill out into new aisles.

Over the past two years, shelf-stable kombuchas have entered the supermarket. Though this new innovation is nascent, brands embracing the format — including category trendsetters such as Humm and Revive — are utilizing unique brewing methods and aluminum can packaging to expand their presence throughout the store — and into new channels like convenience and club where they hope to drive trial with a whole new cohort of shoppers.

According to Hannah Crum, president of industry trade group Kombucha Brewers International (KBI), the emergence of shelf-stable SKUs goes beyond just a caloric change, with category-blurring line extensions such as soda-adjacent Health-Ade Booch Pop or new zero sugar innovations also playing an important role in attracting consumers. While some kombucha brands may tend to view each other as their top competitors in store, these new products may be a rising tide, lifting the entire category.

“As always with new industries, people feel internally competitive,” Crum said. “But I think really who we’re competing with are energy drinks, we’re competing with any choice an everyday consumer makes that isn’t kombucha. So anytime we can shift their attention towards a kombucha-based product, that’s going to be a good thing for the entire category.”

Earlier this year, Humm debuted a new shelf-stable Zero Sugar product line intended to help the brand play to a broader base of consumers. According to Danek, even a small amount of sugar in kombucha is still too high for a wide swath of shoppers who are seeking to reduce their intake — including but not limited to those following hard no-sugar diet trends such as keto. The new line, packaged in 11 oz. cans and available in four flavors, had a delayed rollout due to the COVID-19 pandemic but is now in a “mini-launch” period ahead of a stronger push this upcoming spring that will include major national retailers.

Danek called the innovation a necessity, noting that as kombucha sees declining growth in the natural channel, being able to scale distribution and provide new use occasions is pivotal to the category’s next steps.

Citing internal data, Danek said that 44% of consumers who try kombucha do not return to the category, either due to its polarizing taste or high sugar content. In 2018, Humm released a reduced sugar line — only 5 grams per 8 oz. serving — but Danek noted that product was only “a stepping stone” to achieving an authentic zero sugar product that stayed true to the standards of identity for kombucha.

“We’ve always known that kombucha would have to evolve,” she said. “The biggest burning question is not about ‘will it happen?’ It’s about whether it can be done in a way that is live, raw and authentic to what kombucha is.”

Humm’s Zero Sugar line is not pasteurized and instead achieves shelf stability through a unique proprietary brewing process that allows its yeast culture to consume all sugar added before adding plant-based sweeteners such as monk fruit and allulose alongside organic flavors. The method is adapted from Humm’s recipe to create naturally non-alcoholic kombucha, which removes the need for refrigeration.

According to Crum, COVID-19 has presented kombucha with a significant moment of opportunity. This diversification of the category through new products is now coinciding with an upheaval in consumer behavior where health and wellness concerns are pushing kombucha to “the top of the grocery list” while the limitations of indoor gatherings means outdoor use occasions are up. In essence, the introduction of better-for-you, added functionality and more convenient formats into the category have come at the right moment.

Although Crum pointed to the influx of prebiotic sodas as one way innovation is providing consumers with more choices, she said new products such as Health-Ade’s prebiotic Booch Pop and functional Plus lines are changing how consumers think of the category.

“The more places that consumers can go to see the word kombucha at eye level, that’s great,” Crum said. “Maybe they don’t know about the refrigerated product, and they’re trying the prebiotic or the zero sugar product first. And that’s how they get intrigued. That helps them then to expand their thought process from thinking kombucha is a particular brand to kombucha is a whole category.”

The Road to Convenience

Founded in 2010, California-based Revive Kombucha grew up in the tradition of most other major kombucha brands by producing a raw, refrigerated product packaged in glass bottles. But in 2017, the company began making the shift to aluminum cans, positioning itself as one of the first in the space to transition to the packaging format, and in 2019 the rebranded, shelf-stable line made its debut. According to founder and CEO Sean Lovett, the move required a ground-up redevelopment of the product, including a proprietary process that includes pasteurization and added probiotics.

The move, Lovett said, unknowingly helped prepare Revive for the pandemic as the company launched its online Amazon and direct-to-consumer business earlier this year amid the March lockdowns.

Though Revive’s brick-and-mortar footprint is focused around the California market, Lovett noted the transition has opened up new opportunities with DSD distributors, convenience stores, up and down the street accounts and food service.

But even as stability at ambient temperatures provides brands an opportunity to expand throughout the store, retailers are not all jumping to let them. Often, the grocery buyer for dry shelf and the buyer for the cold case are different, and there’s a hesitancy among them to place the same brand in both sets. According to Danek, playing in both the refrigerated and dry space can pose a risk for brands and some customers may force companies to choose a single lane so not to confuse consumers.

The issue has been further compounded by the COVID-19 pandemic. While buyers are beginning to accept new products again in many places after long periods of paused resets, retailers are still on average taking fewer SKUs in order to maximize their ability to offer essential products.

“It expands the ability to have different conversations with the retailer, but I don’t know that until the shelf stable product takes off that it’s going to give you a lot of ammunition,” she said. “But I think it’s too early in the game to really have a big response from retailers other than ‘this looks interesting and let’s give it a try.’ But if we do, we might be taken out of the refrigerator.”

At Revive, Lovett said every retailer needs to be approached differently and it has forced his brand to be “flexible” in regards to positioning. While the cold box is frequently preferable, he noted that shelf-stability allows the company to improve its merchandising through in-store displays.

Though he said it’s still too early for Revive to say whether the transition has been a proper “success,” Lovett noted that in many stores the brand is moving as many cases on the dry shelf as it would in coolers. A major advantage, he said, is it allows consumers to pantry load, leading to increased volumes.

“There’s just more freedom in being both refrigerated and non-refrigerated,” Lovett said. “I think it goes back to ultimately who the consumer is, and it means they don’t have to go fill the fridge up, right? If you’re a high-frequency kombucha consumer, you might be drinking two to three a day. And so, imagine what kind of fridge space you’re committing to at home [with refrigerated products].”

According to Jared Smith, VP of business development at KÖE Kombucha parent company Stratus Group, demand for kombucha in c-stores helped push his brand to take an omnichannel strategy out of the gate. Though the brand has found some early traction in natural channels where, despite the category’s overall plateauing sales, the ability to merchandise with display cases has given it an edge over the cold box, convenience has presented itself as a place where KÖE can dominate as an early adopter.

Kombucha players such as KÖE, GT’s and Health-Ade were a noticeable presence at the National Association of Convenience Stores (NACS) Show 2019, representing the early signs of a shift towards health and wellness in a channel still dominated by indulgence and energy products. KÖE — which is available in 12 oz. cans — is now in more than 1,300 7-Eleven stores in Southern California and has in recent months added drug accounts such as Rite Aid.

“Shelf stability has really helped with the extended shelf life,” Smith said. “I think it’s allowing more c-stores to be a little bit more risk taking and innovative, while not worrying about the product coding out on the shelf.”