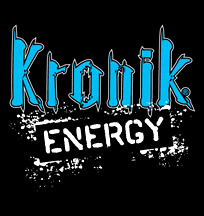 Phoenix, AZ (June 23, 2011): The makers of Kronik Energy have joined The Pantry, Inc., the leading independently operated convenience store chain in the southeastern United States, for the “Salute Our Troops” campaign inviting customers in more than 1,600 Kangaroo Express convenience stores across 13 states to demonstrate united support for military personnel and their families.

From Memorial Day to Labor Day, Kronik Energy and Kangaroo Express will invite store guests to make donations toward its $1 million fundraising goal. Funds will support the USO, celebrating 70 years of delivering programs, entertainment and other services to the military; Wounded Warrior Project, honoring and empowering injured servicemen and women; and five state-based military support organizations.

In addition to inviting all Kronik Energy social media fans to support the campaign, Kronik Energy will be handing out free samples of their refreshingly delicious line of energy drinks at each stop of the Jeep Tour.

“We are thrilled to be a part of this campaign,” says Chris Wickson, Vice President of Sales and Marketing for KroniCo. “It is such a huge honor to be welcomed into the Kangaroo family, and we embrace the opportunity to do our part to make ‘Salute Our Troops’ a huge success.”

Salute Our Troops celebrations will be held throughout the southeastern United States. A Jeep Tour will honor military heroes and their families along the route with celebrations in local communities.

“This summer’s Salute Our Troops is an ideal campaign for Kangaroo Express and our partners to support of the men and women who serve our country,” said John Fisher, senior vice president of The Pantry. “We are proud to join Kronik Energy in this campaign to provide an opportunity for our store guests to thank our military for the work and sacrifices required to protect our nation and preserve our freedom.”

Store guests will be encouraged to support the program with $1 donations. Customers will add their own voice of gratitude with “shout outs” of pride and appreciation by posting photos and videos on the Kangaroo Express Facebook page. Many will be showcased on the Salute Our Troops website at www.KESalute.com.

Headquartered in Phoenix, Az., the KRONIK ENERGY® brand was created in 2003 before the term “Energy Drink” became a household word.  The company is looking to expand its network of retailers and distributors.  Already the 4th best-selling energy drinks in Arizona and officially known as “Chronic Fatigue’s worst nightmare”, Kronik Energy drinks are quickly becoming a major player in the Category.  To become a retailer or distributor of KRONIK ENERGY®, contact: Chris Wickson 623-580-9221 or chrisw@kronikenergy.com

About The Pantry and Kangaroo Express

Headquartered in Cary, North Carolina, The Pantry, Inc. is the leading independently operated convenience store chain in the southeastern United States and one of the largest independently operated convenience store chains in the country. As of May 9, 2011, the Company operated 1,659 stores in thirteen states under select banners, including Kangaroo Express®, its primary operating banner. The Pantry’s stores offer a broad selection of merchandise, as well as gasoline and other ancillary services designed to appeal to the convenience needs of its customers.

With more than half of our stores located within 25 miles of a military installation, Kangaroo Express has supported the military and their families for many years. More than one-third of our employees have direct connections with the U.S. Armed Forces, either having served in the military or having a family member currently serving our country. In fact, more than 10 percent of employees at Kangaroo Express stores and more than 17 percent of employees at the corporate offices previously served in the Armed Forces. For more information about Kangaroo Express, please visit www.kangarooexpress.com. For more information about the Salute Our Troops campaign, please visit www.KESalute.com.