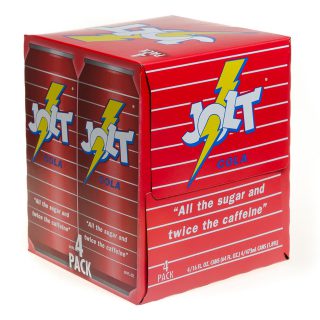 With more than 300 million users on Amazon, Jolt Cola recognized that the fastest way to get Jolt in the hands of as many fans as possible was to accelerate its distribution with the leading online retailer. Demand for Jolt Cola has outpaced its availability since returning to shelves nationwide last month.

“We heard our customers around the globe calling out for a cold can of Jolt Cola,” said Kathryn Lyons, Jolt Cola Spokesperson. “The Jolt team worked to put a worldwide distribution deal in place with Amazon as quickly as possible. We’re ramping up production to meet demand and will have more inventory available in the weeks ahead.”

“Jolt Cola coming back is a big deal,” proclaims Paste Magazine. “[It’s] dangerous even by 80’s standards.” CNET calls it “the 80’s geek fuel of choice” and New York Post reminds us all that Jolt Cola is “the drink responsible for caffeinating a generation.”

Amazon will begin selling a limited number of Jolt Cola four-packs this week and will have a steady supply by month’s end. Customers can pre-order on Amazon now here.

“You wake up, drink a Jolt, kick ass, order more and repeat,” said Jolt CEO, Doug Dixon. “If we could’ve had Jolt delivered to our front door in 1985, we would have kept going for days. Snowflake hipsters don’t know how much awesomeness awaits them with their first can of Jolt. Now they can order it on Amazon and feel the rush of all the sugar and twice the caffeine without wrecking their pour over coffeehouse street cred.”

The delicious but dangerous beverage is recommended for adult consumption only.

Launched in 1985 as America’s first carbonated energy drink, Jolt Cola dominated the hearts and minds of gamers, hackers, journalists and other night owls across the country with its commitment to all the sugar and twice the caffeine in every can. Despite its cult following, Jolt evolved away from its original core product and stopped production. Jolt CEO Doug Dixon’s vision for Jolt Cola as the phoenix of energy drinks brought the seriously jacked-up cola back to market in September 2017, with single cans available for purchase exclusively at Dollar Generals across the country and now in four-packs on Amazon.