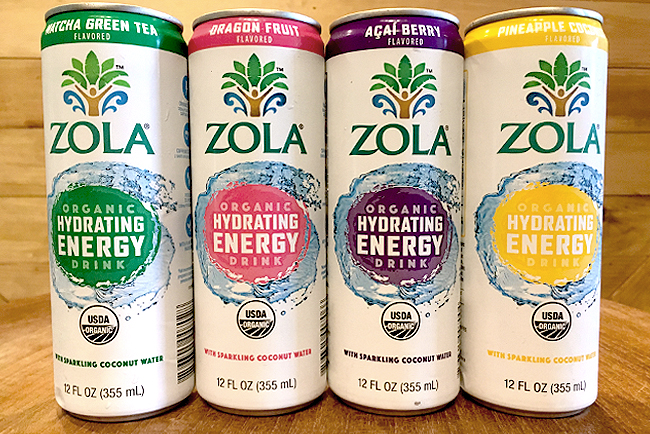 As the first shipments of Zola’s new “2.0” packaging roll out to stores, the coconut water and acai beverage maker has launched a new energy drink line as part of a move toward a more comprehensive brand hierarchy.

At launch, the energy line includes four SKUs: Acai Berry, Dragon Fruit, Matcha Green Tea, and Pineapple Coconut. The products retail for a suggested price of $2.49 per 12 oz. can. Each can contains 120mg of caffeine and 230-240 mg of potassium.

Cuvelier said the company saw a gap in the market for a hydrating energy line. He cited an internal consumer research study in which two-thirds of respondents said they were concerned about having enough energy to get them through their day.

“There’s been a lot of companies over the past ten years talking about healthy energy and a lot of the time they weren’t getting any traction,” Cuvelier told BevNET. “What we started seeing a couple years ago was there were some smaller energy brands building a following. It was the evidence of the success those brands were having, and when we went out and talked to consumers, we thought there was a big opportunity to come in and own that.”

Zola chief growth officer Pete Brennan described the new energy drink line as “the first-wave of a vast innovation pipeline” built around the brand’s new “Plant-Powered Hydration” identity and that the company would work to develop more products with the same ethos.

Since announcing the Zola rebrand in March, the company has also made strong distribution gains, Cuvelier said. The brand’s plant-based positioning has struck a chord with buyers and helped secure a slew of new retail accounts.

“We’ve got a lot of new authorizations really based upon the new positioning,” Cuvelier said. “What’s really resonating with buyers is plant-based nutrition that offers functionality. Whether that’s coconut water with hydration, or pitching this concept and saying there’s opportunity to take it in a different direction with energy.”

Although it’s too soon for the company to understand how consumers are responding to the rebrand, Zola has also begun a significant marketing push and has partnered with influencer groups and conferences, including Startup Grind, TECHmunch and IVY, to host events and expand the brand’s reach. The campaign includes a new slogan, “Live Zola / Be _____” which encourages consumers to pursue their passions. Zola will also reach out to influential entrepreneurs and athletes in hopes of reaching a broad variety of demographics.

“We really wanted the quality that was inside the cans and bottles to be expressed on the package, and that’s coming through,” Brennan said. “As we’re tasting the product, as we’re sampling to individuals, what we’re hearing is very positive feedback and they’re wowed by a product that many of them had never tasted before.”