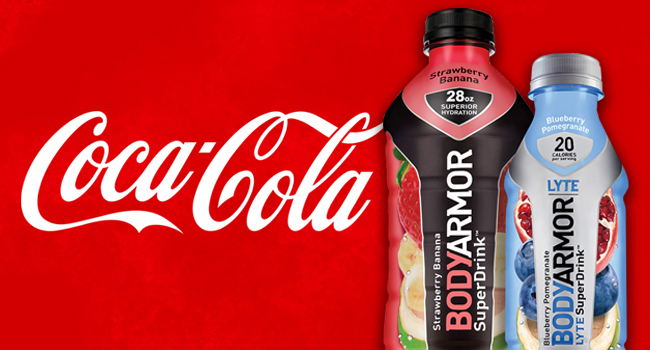 The Coca-Cola Company today announced it has agreed to purchase a minority stake in BodyArmor, a move that will see the sports drink brand exit its distribution partnership with Keurig Dr Pepper (KDP) and enter Coke’s nationwide bottling system.

The investment, terms of which were not made public, will join Coke’s Venturing and Emerging Brands (VEB) portfolio, which has been involved in the past acquisitions of Honest Tea, Zico and sparkling mineral water brand Topo Chico. VEB also has formed limited partnerships with other brands including Suja, Fairlife and Health-Ade Kombucha.

Coke is now the second-largest stakeholder in BodyArmor behind co-founder and chairman Mike Repole.

According to a press release, BodyArmor will continue to operate as an independent company, but Coke will be allowed to increase its ownership in the future, subject to defined terms.

“In a fast-moving and dynamic industry, and during a time of unprecedented change at Coca-Cola, we’re challenging the status quo and bringing innovative, boundary-less thinking to our strategic relationships to ensure we are offering the products consumers want,” said Coca-Cola North America president Jim Dinkins in a press release. “BodyArmor is one of the fastest growing beverage trademarks in America and competes in exciting categories. I have no doubt it will prove to be a strong offering to our system alongside our already powerful hydration portfolio as we accelerate our position as a total beverage company.”

Founded in 2011 by beverage entrepreneur Lance Collins, BodyArmor has aggressively pitched itself as a better-for-you alternative to traditional sports drinks, such as Gatorade, which is owned by PepsiCo. The company is led by Repole, who became a co-founder through investment in 2012. Though the brand represents approximately 6 percent share of the sports drink category, compared to 75 percent share for Gatorade, it has rapidly made up grown on its rivals. According to data from Nielsen, BodyArmor sales were up 110.6 percent across all channels during a four-week period ending on July 14.

Brand expansion has been fueled by new lines — such as BodyArmor SportWater and the low-calorie Body Armor Lyte — and partnerships with high profile athletes like NBA star James Harden and baseball’s Mike Trout. In 2013, former Los Angeles Lakers legend Kobe Bryant became the third-largest stakeholder in the company, and has been active in supporting the brand’s marketing and promotion efforts.

In 2015, Dr Pepper Snapple Group (DPS), now KDP, paid $20 million to acquire an 11.7 percent stake in BodyArmor at a $170 million valuation. DPS boosted its stake to 15.5 percent the following year, investing an addition $6 million. The stake has since been diluted to 12.5 percent, according to The Wall Street Journal.

BodyArmor will join Powerade in Coke’s stable of sports drinks, which includes Vitaminwater Active and Honest Sport. Repole and Collins both have prior history doing business with Coke; the former was a co-founder and president of Vitaminwater at the time of Coke’s $4.1 billion purchase of Glaceau in 2007, while Collins sold Fuze Beverages to the soda giant the same year.

“BodyArmor is revolutionizing the beverage industry by providing the hydration that more and more of today’s athletes want and need,” Repole said in a press release. “We are confident that this agreement gives us the best opportunity to significantly accelerate our mission to make BodyArmor the world’s best premium sports performance and hydration brand. This is thanks to the strength and scale of Coca-Cola’s newly refranchised and energized bottling system in North America, as well as longer-term opportunities for international growth.”

For KDP, the departure of one of the strongest performers in its allied brands portfolio will likely spell further uncertainty over the newly formed company’s long-term beverage strategy.

Last month, Fiji Water announced it was exiting its distribution deal with KDP in favor of self-distribution. While some allied brands have left, at least one has been fully acquired: According to a CNBC report, Texas-based soda company Big Red has been acquired by KDP in a $200 million deal.

Wells Fargo Securities analyst Bonnie Herzog noted that integrating BodyArmor into Coke’s distribution network should help the brand grow domestically and in international markets. “In short, we think BodyArmor will benefit from being a part of [Coke’s] nimble, entrepreneurial culture — and see this as an opportunity for Coke to further innovate and accelerate growth across its portfolio,” she wrote in the Wells Fargo Equity Research newsletter.

Herzog also wrote that BodyArmor has notified KDP of its intention to terminate their existing contract, but no further details on timing or procedure for the transition to Coke have been given. She said the transaction was a negative for KDP, noting that other allied brands could also be at risk of leaving also.

Meanwhile, Deutsche Bank analyst Steve Powers noted that having BodyArmor join Monster Energy drinks in Coke’s distribution network could have a negative effect on the latter in the absence of careful management.

Howard Telford, head of soft drinks at market research group Euromonitor International, commented that both Gatorade and Powerade have “struggled to evolve and reach consumers eager for natural isotonic alternatives,” a group with which BodyArmor has been successful.

“From Coca-Cola’s perspective, it will be interesting to see how this minority investment in Body Armor impacts their approach to the sports drink/isotonic category in the near future,” Telford said in a statement shared with BevNET. “Powerade is a direct competitor of Body Armor on the shelf, but this ‘natural athletic hydration’ space is also potentially occupied by Zico coconut water and Honest (through the Honest Sport launch 2 years ago), both Coca-Cola VEB brands.”