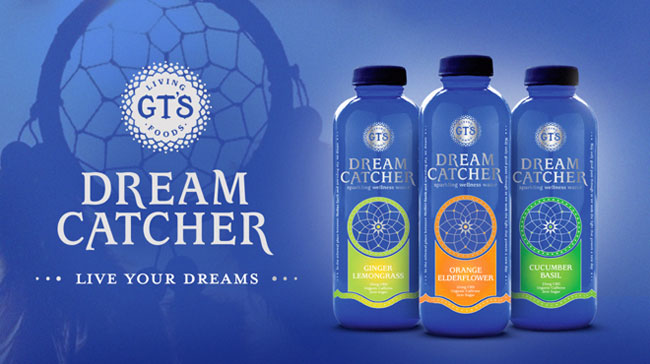 GT’s Living Foods founder GT Dave announced the launch this morning during his presentation at BevNET Live Winter 2018 in Santa Monica, Calif. Calling the new line a “lovechild” inspired by his own childhood experiences with spiritualism, Dream Catcher is positioned as a “wellness water” with 25 mg of CBD per 10 oz. bottle

“Yes, CBD has been a trend recently, but honestly I’ve been keeping my eye on CBD for the past five or six years,” Dave told BevNET CEO John Craven during a Q&A on stage. “I think what had to kind of catch up with that desire to make a CBD product was making sure that the market was ready, the consumer was educated, and there was reliable, ethical suppliers that I could partner up with. And I’m happy to say we’ve arrived there.”

Speaking with BevNET later, Dave said Dream Catcher will be targeting “everywhere CBD is sold,” with the exception of cannabis dispensaries. Dave said the products will begin appearing on retail shelves in Southern California later this month with a larger expansion slated for January, even while he acknowledged that the legal framework around CBD may limit its distribution footprint.

“We’re not looking to exploit CBD nor do we want to force this on retailers who are not ready,” Dave said. “For me, it’s more about how this ingredient can bring value into our consumer’s lives and allowing Dream Catcher to be a trusted source for a high quality CBD experience.”

Although the company has not yet determined a suggested retail price, Dave said he hopes the line will retail for about $3.99 per unit, adding that he delayed the original launch of Dream Catcher due to the high costs of sourcing legal hemp-derived CBD.

In recent months Dave has become an outspoken advocate for CBD joining a group of brand owners in August who are mounting a campaign against the California Department of Public Health after the department released an FAQ stating CBD as an ingredient is not approved as a food or dietary supplement. Dave hopes his brand can educate more consumers about CBD and pave a path forward for the emerging hemp and cannabis space.

“I believe at GT’s Living Foods that we’re blessed with the ability to be trailblazers,” he said. “And you can’t be a trailblazer if you don’t blaze some trails. So that’s what we’re doing here with Dream Catcher.”