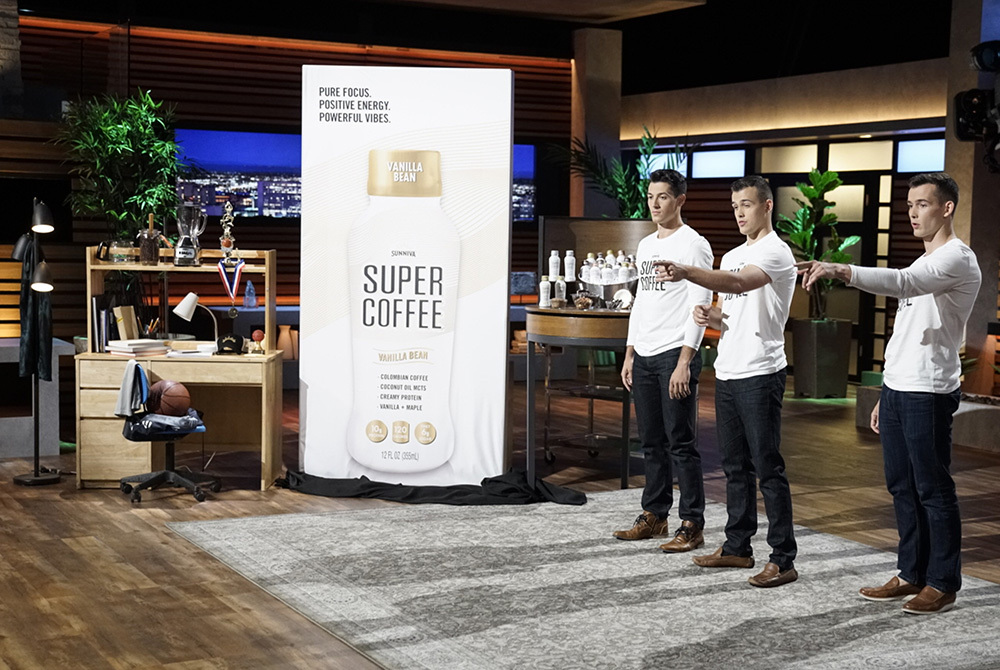 NEW YORK — Jordan, Jim and Jake DeCicco, the brothers behind Sunniva’s Super Coffee, were featured on ABC’s Shark Tank on Sunday night, February 11, pitching their all-natural, healthy, energy boosting coffee beverage to the five sharks while seeking a $400,000 investment in return for a 4.5 percent stake in their business. While they left the tank without a deal, they went home with a wealth of positive feedback, advice, exposure, and lessons learned from their once-in-a-lifetime experience.

“At the end of the day, I’m doing this with my two little brothers. It’s love, it’s trust, it’s hustle, it’s competition, and no coach, no shark, no boss can tell us otherwise because we know what we set out to do, and we’re going to do it,” said Jim DeCicco at the end of the Shark Tank episode.

Now, the three brothers who grew up in Kingston, NY, are hoping to grow their brand and product utilizing the nearly 10 minutes of national exposure they received while swimming with the sharks on ABC-TV. The show drew a .8 national ratings last night.

Since the episode aired, Super Coffee has seen an increase in sales, garnering more sales on Amazon and their website in just 12 hours than they saw in online sales in all of 2017. Super Coffee’s website also saw 75,000 unique visitors, with a 54 percent conversion rate. Visits to their online “shop” page was increased by 21,750 percent as of 12 p.m. on Monday, February 12.

A deal was never reached between the DeCicco brothers and the Sharks, but there was certainly some sincere interest from nearly every Shark in the Tank.

“You found a niche,” said Mark Cuban. “You got a great name that’s eye-catching and will make people interested. You’ve got a competitive price here — the lowest cost provider here in this category.”

“You guys have the hustle, and I love that. You have a smart idea. I think it’s right on trend,” said Lori Greiner.

Perhaps the closest the three brothers came to a deal was with Barbara Corcoran, who couldn’t say enough about the entrepreneurs. “You’re different. Here, I get three for the price of one. And to great credit, you’re enormously disciplined and have high energy. It’s obvious how you feel about your product. I’m very inclined to go into the deal.” While Corcoran eventually went “out” on the deal, she did mention to the other Sharks, specifically to guest Shark Rohan Oza after the pitch, “I really wish I could’ve gone in on a deal.”

Oza, an American businessman known for his success with multiple beverage brands, said: “The taste profile is great. I want to commend you on recognizing the shift that’s happening in the food and beverage industry today. You guys have recognized a shift that’s happening, which is high protein, high good fats, low sugar. So, I’m thumbs up with you on that. I’m also really impressed with your velocity.”

The DeCicco brothers were, as they say in college basketball, “on the bubble,” in regards to getting a deal in the Tank. And as all three of them grew up as athletes, they understand what it means to force themselves to get back up after not scoring — in this case, a deal.

“We didn’t get a deal, but we gained more from a business standpoint than we could’ve in any business meeting we’ve ever sat in,” said Jake DeCicco. “The sharks applauded us for our hard work, our numbers and our product, but it just wasn’t the right deal at the right time for them, and we completely accept and understand that. You can’t win them all, but hey, we certainly didn’t lose.”

Super Coffee, which was created by Jordan DeCicco in his dorm room at Philadelphia University, is available on Amazon, and in retail stores between Washington, D.C. and New York City, including Wegmans, Whole Foods, Wawa, QuickChek, Acme and Fairway, among others. Super Coffee is also available in fitness centers, including Equinox, Vida Fitness, Crunch, Tone House, Switch Playground, Rumble and Dogpound, as well as on  college campuses, corporate cafeterias and hospitals nationwide. Meet the brothers and sample Super Coffee at drinksupercoffee.com.