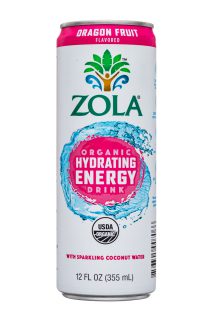 “We spent the past year building out a new team, updating the Zola brand and creating innovative plant-powered hydration beverages. Statewide Beverage Company is a strategic sales partner that will accelerate the launch of our new items, fuel distribution expansion, and tell our brand’s story to a broader audience,” said Zola CEO and Founder, Chris Cuvelier.

Statewide Beverage Company adds an important layer to Zola’s route to market strategy.  The Southern California market is vital to the growth of natural and organic beverage brands, and Statewide will deepen Zola’s presence in the market with a fast-growing customer base that already includes over 4,000 retailers, covering multiple channels. Zola’s CEO & Founder stated, “By adding a dynamic DSD distributor like Statewide to our list of partners, we are able to put our products in front of the right consumers in the Southern California market, and better execute our plan of delivering natural hydration and the power of plant-based ingredients that provide the energy and focus people need to crush their day!”

“We are inspired by Zola and believe in the product, the team, and most importantly the brand,” said Jeff Javidzad, CEO of Statewide. “Our unique blend of deep customer relationships across channels paired with deep beverage category experience matches up perfectly with Zola’s approach to transforming the market with plant-powered hydration,” added Jeff. “We’re excited to collaborate with Chris and his team in bringing their vision and innovative products to market nationwide, and look forward to helping broaden Zola’s distribution and success in the U.S.”

Headquartered in San Francisco, CA, Zola was founded in 2001 by CEO, Chris Cuvelier, who launched Zola as the world’s first bottled Açaí juice.  Chris has been driving category innovation ever since, with the introduction of Coconut Water in 2011, and most recently in 2017, a line of Organic Hydrating Energy drinks made with sparkling coconut water to hydrate and organic plant-powered energy sources to re-energize and replenish.  Zola’s NEW Organic Sparkling Energy Waters, launching Summer 2018, round out the portfolio, delivering plant-powered caffeine and antioxidants with only 10 calories and no added sugar.

Statewide Beverage Company, headquartered in Los Angeles California with distribution warehouses in Commerce, San Diego and Inland Empire distributes a full line of beverages including Beer, Wine, non-alcoholic beverages and premium waters to retailers across Southern California. Founded in 2011, Statewide has cultivated one of the largest, most efficient and reliable Direct Store Distribution (DSD) networks in Southern California. Statewide is focused on providing excellent service to all of their customers and suppliers. Statewide’s fast-growing customer base includes over 4,000 retail chains and independent stores, and continues to grow. Statewide delivers some of the world’s most recognized beverage brands, including Zola.