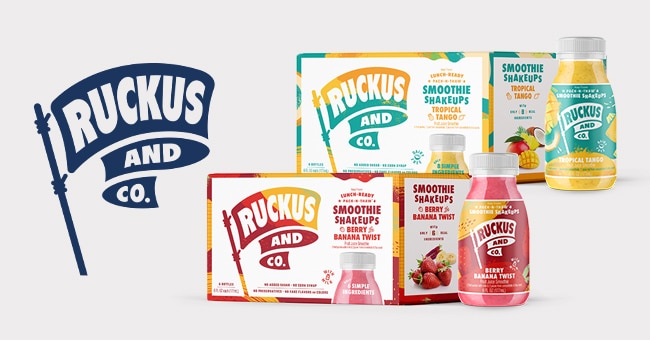 Mondelēz didn’t necessarily intend to use its innovation arm, SnackFutures, as a means to make its first-ever step into RTD beverage, but that’s exactly what’s happened.

Next month, the company will begin piloting Ruckus and Co., a two-SKU line of ready-to-drink frozen fruit smoothies set for broad launch in summer 2020. Available in dairy-based Berry Banana Twist and coconut milk-based Tropical Tango flavors, each 6 oz. bottle is designed as a “pack-and-thaw” item that can go into kids’ lunch boxes straight from the freezer in the morning and be ready to consume by midday. The line will be sold in 4-packs (suggested retail price $7.99) in conventional grocery and 6-packs ($10.99) in the club channel.

Created in 2018, SnackFutures has already started to make progress on Mondelēz CEO Dirk Van de Put’s stated goal of generating $100 million in growth by 2022: the division began testing two new snack lines, Dirt Kitchen and CaPao, in July. Developing snacks aimed at school lunches was a strategic priority from the beginning, but according to Shannon Neumann, senior manager of innovation at SnackFutures, the company at first “didn’t even know it was going to be something that went into a bottle.”

Casting a wide net across 12 different food types to start, the company “co-created” Ruckus & Co. with a small group of parents and kids, testing and iterating product concepts throughout the process with convenience and nutrition serving as guardrails.

“Every single time we brought new ideas to them, it was the smoothie that was the slam dunk,” she said.

As with other kids’ beverages, Ruckus and Co. was developed to appeal to both kids and adults. The latter group, Neumann said, is primarily concerned with nutrition and ingredients; in terms of formulation, it was “less about the presence of additives and more about the absence of negatives.” Along with offering dairy or dairy free options, the line is free from added sugar, preservatives and artificial ingredients and is both nut and gluten free. The carton packaging on the 4-pack and 6-pack formats is aimed at parents, with callouts to “lunch-ready” and “8 simple ingredients,” which include fruit juice from concentrate, fruit puree and chia seeds.

Finding the right brand voice to capture the target audience of kids ages 6 through 12, however, required some fine tuning. The branding for Ruckus and Co., developed by Interact Boulder, is aimed at giving younger consumers a slightly more mature, aspirational brand. As such, it steers clear of cartoon mascots or overt references to a younger audience.

“Kids this age are ‘kidulting,’” Neumann said. “One day they wake up feeling like little adults. They don’t want something that their little brother or sister can have. They want to have something that is connecting with them, so having a different experience was important.”

Beginning in January, Ruckus and Co. will be tested in 10-15 stores in California over a period of 2-3 months or until supply is exhausted, Neumann said, with the aim of ironing out any issues ahead of a broader summer launch during the back-to-school shopping season. The product will be manufactured in California by Glanbia Nutritionals.

Though legacy Mondelēz brands include names like Crystal Light and Tang, Ruckus and Co. represents the company’s first step into both RTD products and frozen CPG, moves that Neumann said were indicative of the company’s open-door approach to innovation rather than a desire to lay claim to specific categories. Within Ruckus and Co., she noted, the company has options to grow alongside its consumers with new fortified varieties and vegetable-forward green juices.

“We want to plant seeds for what are the snacking opportunities where we can make a difference,” she said. “This just happened to be in beverage.”