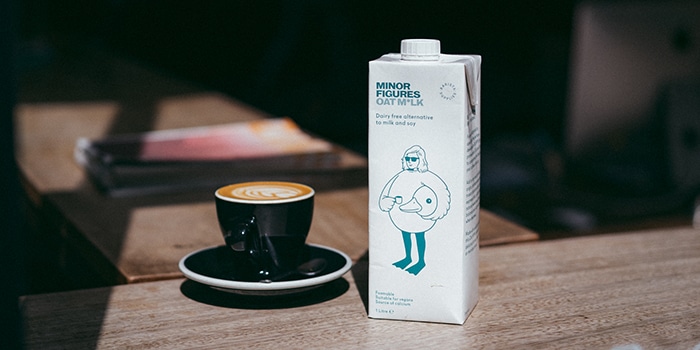 U.K.-based coffee brand Minor Figures didn’t create its oat milk with a dairy-like experience in mind, and they don’t care who knows it.

“Essentially, we really don’t give a (expletive) about milk,” explained co-founder Stuart Forsyth on the phone from the company’s base in London. “We’re not trying to replicate dairy in any way. We are just trying to make the best product for specialty coffee.”

Coffee has been an essential component of oat milk’s explosive growth over the last two years, quickly becoming the go-to non-dairy option for baristas behind the espresso bar at specialty cafes across the country. According to IRI, the category holds a 2.6% dollar share of the plant-based milk category, rising to $41.1 million in dollar sales over a 52-week period ended on October 6, 2019. As Minor Figures quietly rolls out to U.S. coffee shops and independent retailers, the four-year-old brand is hoping its coffee credentials and playful personality will help it to disrupt an increasingly crowded marketplace.

Forsyth’s interest in coffee emerged from his experience as general manager at KeepCup, an Australian producer of reusable coffee cups, during which he was introduced to specialty roasters in Europe and elsewhere. Minor Figures launched as a coffee brand in 2016, offering whole beans as well as several varieties of nitro-infused ready-to-drink cold brew. But Forsyth said the company really began to take off in 2018 thanks to a combination of new brand identity and the launch of its two barista edition (one organic, one non-organic) oat milks in 1 liter cartons. As demand surged and consumer interest grew organically via social media, Minor Figures quickly found itself being sold in 22 countries including the U.S., where last year’s Oatly shortage helped “drag” them across the pond into the cafe channel. That experience seeding in independent coffee shops has given the brand a foothold in the U.S., though Forsyth said the rise in competition had squeezed them “very, very hard,” leaving Minor Figures with a patchwork nationwide presence in on-premise accounts.

As an import brand seeking a place within the increasingly crowded plant-based cooler at U.S. retailers, Forsyth acknowledged that Minor Figures will have to be strategic about when and where it competes with the category’s other major players. The product is still manufactured in the U.K., and its retail distribution thus far has been limited mainly to specialty retailers in California, such as Erehwon in Los Angeles. But besides his confidence in the liquid — calling its oat milk “the best in the world in terms of quality” — Forstyh said Minor Figures’ playful and quirky brand identity is resonating with consumers in ways its competitors cannot.

“We definitely see ourselves as a challenger brand and, as a result, we have to be more agile, more creative, more interesting,” he said. “You look at those other brands and they all now are quite corporate. They are very, very corporate and now what they are trying to do is hide that and make it seem like they are cool and hip. And the truth of the matter is they aren’t.”

At this early stage, the brand seems to have made a connection, at very least, with consumers in California. The oat milks have been seeded mainly in independent grocers and cafes in the state: in addition to Erehwon, product is also sold at Lassen’s, as well as at cafes such as Verve Coffee Roasters, Lamill and a number of single-location coffee shops in Los Angeles. Forsyth noted that when the company is ready to assemble a U.S.-based team, it will likely be based in California. Minor Figures’ “summery, board shorts, sand in the toes” vibe — available on a range of branded apparel sold alongside its oat milks, coffees and CBD oil tinctures on its online store — suggests it is well-suited for the West Coast market, he said.

Moreover, focusing on California fits Minor Figures’ strategy of being aggressive in specific areas in which it can have the most impact. Whether or not the brand can leverage its brand identity to compete with the likes of Oatly and Chobani remains to be seen, but mainstream coolers are not where it is trying to compete, according to Forsyth (he does admit, however, to having exploratory discussions about entering Walmart last year).

“We kind of know we need to be in the places where people might be interested in such a fun, quirky product,” said Forsyth. “If we can find those retailers, we think we’re going to do well. We think we’ll find our customers and drive business through them.”

He added: “We will never have the money and resources and muscle that (the larger companies) have. Also, no matter how hard they try, they can never be us. So we have what we feel is our little space to operate.”