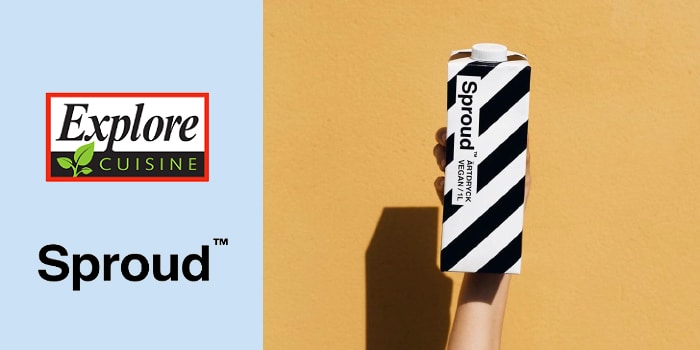 Ethical Brands, parent company of plant-based pasta brand Explore Cuisine, is introducing Swedish pea protein milk brand Sproud to the U.S. this week at the 2020 Winter Fancy Food Show in San Francisco. The company formed a distribution and marketing partnership with the brand last year in an effort to expand upon its goal of offering sustainably-sourced, plant-based products to consumers.

Speaking with NOSH, Ethical Brands CEO Greg Forbes said the company had been looking to scale the company without taking away from its focus on the Explore Cuisine brand and found that Sproud complemented the company’s other brands. He also said Explore Cuisine and Sproud share the same target consumer: flexitarians interested in a “new generation of plant-based products.”

Headquartered in Red Bank, New Jersey, with a subsidiary in Geneva, Switzerland, Ethical Brands owns Explore Cuisine, which distributes its bean and lentil-based pasta to the U.S., Canada, Europe, Australia and several countries in Asia. The company also launched the Food to Thrive Foundation in 2015, aimed at educating and empowering farmers. Forbes said Ethical Brands which was founded in 2011 aims “to look for nutritional, plant-based foods and bring those to consumers across the world.”

Sproud, launched in Sweden in September 2018, established its sales and marketing partnership with Ethical Brands in January 2019, helping the brand to expand distribution to Norway, Finland, Denmark and the United Kingdom. Forbes said Sproud stands out from other plant-based milks currently available in the U.S. because it is shelf-stable, though does need to be refrigerated after opening, with a shelf life of one year. He said the brand aims to be environmentally conscious and maintain a low carbon footprint by utilizing pea protein, which requires less water and land to cultivate than some other ingredients used in alt-dairy milks, and by using ambient distribution, something he noted is becoming increasingly common in Nordic countries. 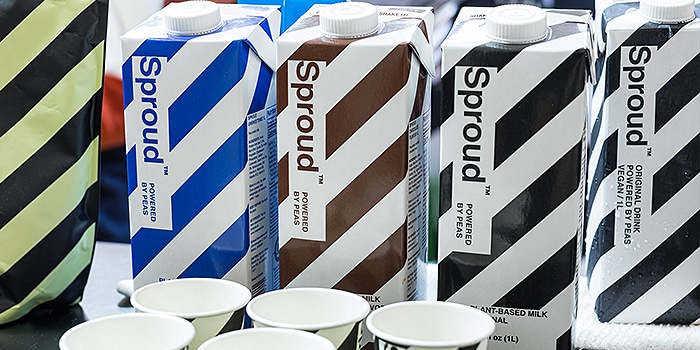 At the Winter Fancy Food Show, Ethical Brands is showcasing Sproud in three flavors: Original, Unsweetened and Chocolate, along with its Barista Formula for foodservice. The product will be manufactured in Canada and will launch online in the second quarter with shipping to Canada and the United States. Forbes said Sproud is also in talks with retailers but that it’s “too early to say” where it will be distributed. Sproud milks will have a suggested retail price of $3.45 to $3.99 for a one liter carton, which he said is the standard size for the product internationally.

Sproud is also rolling out Sproud Nutrition, a line of pea protein-based pre-workout and protein powders that will be introduced in the second half of 2020 in the United Kingdom, followed by North America.

Forbes said he anticipates marketing the “powered by peas” plant-based milk in the United States and Canada to be less of a challenge than in Europe as brands like Beyond Meat and Impossible Foods have already introduced pea protein to much of North America.

“It’s less of a geographical base,” said Forbes. “It’s a segmentation that’s built on a belief that it’s a better way and more interesting way for themselves and for the environment.” 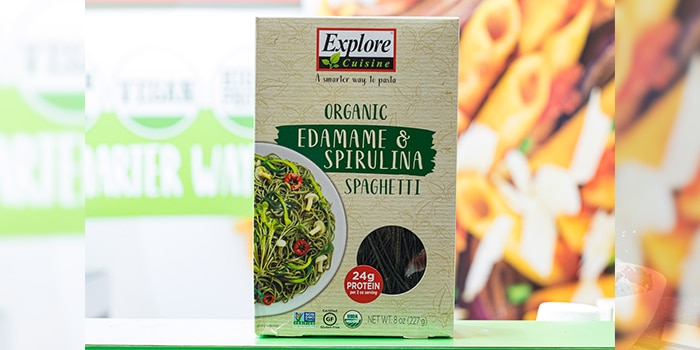 Ethical Brands is also looking to expand upon its sustainability goals in its work with the Food to Thrive Foundation. Forbes said the foundation has been working with farmers in Thailand since 2015 to convert from conventional farming of jasmine rice to organic farming of brown rice used in its line of rice noodles. They’ve recently introduced a second crop, organic mung beans, to the region and Explore Cuisine now sources the ingredient for its mung bean-based pasta products solely from the farm in Thailand. Two percent of the proceeds from Explore Cuisine products go to Food to Thrive.

They have also established a pilot facility in Thailand that allows them to develop and test new products. Forbes said new products are produced at the facility in the first year they’re launched and, if they’re successful, the brand will then take them to co-packers internationally.

At Winter Fancy Foods, Ethical Brands is also showcasing Explore Cuisine’s latest launch, an organic Edamame and Spirulina Spaghetti, the brand’s first superfood-enriched product. It will launch on Amazon on January 28, and roll out to retailers nationwide in the spring.

“What we’re trying to do is give people a choice in terms of what they want to consume,” Forbes said. “The idea is about great tasting products, plant-based, and as low as a carbon footprint as we can possibly deliver.”