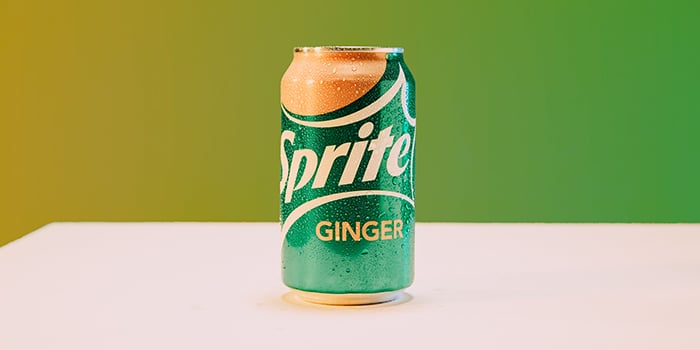 As The Coca-Cola Company turns toward flavor innovation to grow its core CSD portfolio, Sprite is the latest brand to receive a permanent addition to its lineup with Sprite Ginger, launching this month in original and Zero Sugar varieties.

The product follows the launch of Sprite Lymonade in Q1 of 2019 and a seasonal Spiced Cranberry flavor which rolled out in November. Speaking with BevNET, Sprite Group brand director Aaliyah Shafiq said the rollout of Sprite Ginger is part of a move to “reinvent” the brand for an evolving marketplace.

Shafiq said the flavor extensions are a response to “cross-category blurring” in the beverage industry, where consumers are increasingly embracing new flavor profiles; Lymonade, for example, sought to combine Sprite with juice and lemonade. For Sprite Ginger, the company relied on consumer research which showed strong overlap between Sprite consumers and households purchasing ginger flavored products.

“Sprite Ginger is all about offering our consumers and fans variety,” Shafiq said. “These are brands that they already know and love so Sprite Ginger, along with some of the other innovations from our sister brands, offers them more of the variety that follow the trends and tastes that are most important to them right now.”

The company is also applying lessons learned from the rollout of Lymonade, which was initially released only in single serve bottles. Instead, Sprite Ginger will roll out as a “full suite” of products and pack sizes including two liter and 20 oz. PET bottles and 12 oz. cans in both original and Zero Sugar. The cans will be available in single serve and multipacks. The products will be priced in line with core Sprite products.

According to Shafiq, flavor innovations have to date helped expand Sprite’s consumer base without cannibalizing sales of the core line. She noted that the added flavors can also broaden use occasions for the product as an at home or on-the-go product.

“Innovation is definitely helping our portfolio, but not at the expense of our base business,” she said. “So we’re able to grow the entire pie.”

To support the Ginger launch, Sprite is initiating a “full 360 degree” media campaign including TV, billboards, radio and social media ads, Shafiq said. Taking its cues from fashion and music culture, the brand will also offer a “Drop” — a one-time release of limited edition clothing. The company is also partnering with designer Jeff Staple to recruit up-and-coming artists and designers to develop the “Ginger Collection” line of clothing, skateboards and other accessories.

“Sprite has had a long history of supporting the hip hop community, so this is just a way for us to still be culturally relevant in a way that makes the most sense for today’s time,” she said. “We’re not doing anything new from that perspective in terms of supporting the hip hop community, but what is new and important for our current fans is we are giving a platform for emerging artists.”

The focus on innovation for Sprite follows a wave of flavor rollouts for the core Coca-Cola and Diet Coke lines over the past two years, including a 2018 relaunch of Diet Coke featuring new flavors such as Ginger Lime, Feisty Cherry and Twisted Mango, the 2019 release of Orange Vanilla Coke (the first new flavor for the core line since 2007) and the launch of Cherry Vanilla Coca-Cola this month.

The new innovations come at a time where sales of CSDs are facing declines and muted growth as consumers embrace better-for-you beverage options. For Coke, sparkling soft drink sales grew 2% globally in 2019, driven by African and European markets, according to the company’s Q4 and fiscal year 2019 earnings report.