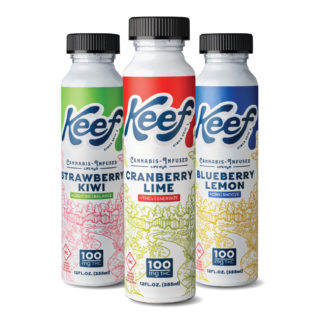 An expansion of Keef Brands’ low-calorie and low-sugar Life H2O beverage line, the three newly released drinks highlight lesser known yet promising compounds found in the cannabis plant: THCv (studies have shown this cannabinoid to produce energizing effects, as well as the potential for suppressing one’s appetite); CBG (non-psychoactive with reported antibacterial, antimicrobial, and anti-inflammatory qualities); and CBN (reportedly can be used as a sleep aid).

The new formulations of Keef Life H2O are still infused with the phenome specific cannabis strains with which the line was originally developed, but now contain these added cannabinoids alongside the THC to further their functional purposes. Keef Brands’ new beverages formulated with alternative cannabinoids include:

Cranberry Lime ENERGIZE +THCv: *Respected for its stimulating effects, THCv can now be found as an added cannabinoid in the Life H2O Cranberry Lime. The THCv pairs seamlessly with the original sativa dominant base providing a daytime beverage that is intended to keep you both motivated and focused.

Strawberry Kiwi BALANCE  +CBG: *Long admired for its ability to help regulate the body’s muscular and mental tensions, the newly added CBG to the Life H2O Strawberry Kiwi pairs perfectly with the hybrid dominant base.

Blueberry Lemon SNOOZE  +CBN: *Idolized for its sleepy time effects, Keef Brands added extra CBN cannabinoids to the Life H2O Blueberry Lemon. With the same taste and indica dominant base, CBN simply brings it to the next level of relief.

“The new Keef Life H2O products with THCv, CBG and CBN mark the beginning of a new chapter that goes beyond using the traditional THC active ingredient, and work to enhance the functional properties and potential wellness benefits of our products in tandem with our focus on great taste and high bioavailability,” said Keef Brands CEO Travis Tharp. “The possibilities for integrating cannabis into every aspect of our lives, from fitness to rest to concentration and beyond, are nearly limitless.  We as an industry and cannabis community are at the nascent stages of utilizing over 300 different active ingredients.”

The new products come on the heels of Keef Brands’ expansion into three new states – Missouri, Ohio and Maine. The company currently operates in eight markets. The brand has also partnered with BevCanna to position Keef Brands’ expansion into Canada later this year. The expansion follows a benchmark 2020 for Keef Brands, during which the company celebrated its 10th anniversary and earned the largest year over year growth of beverage market share (by dollars sold) in 2020, according to BDS Analytics.

*Statements made above about product efficacy have not been evaluated by the FDA. Keef Brands products are not intended to diagnose, treat, cure, or prevent any disease.

A recognized leader in the cannabis space known for its track record of innovation, taste and consistent quality, Keef Brands develops, produces, and distributes multiple cannabis-infused product lines including Keef Classics, Keef Mocktails, Keef Sparkling H2O, Keef Energy, Keef Life H2O, Keef PAX Pods, Keef Carts and Keef Oil Syringes. This diverse and carefully curated product portfolio continues to be an award-winning brand, including the Westword 2019 Best in Denver Readers’ Choice for Best Edible Company. According to BDS Analytics, Keef is the #1 cannabis beverage brand (by both dollars and units sold) in the United States in 2020 and Keef has seen the largest year over year growth of beverage market share (by dollars sold) in 2020. Founded in Boulder, CO, the company has been at the forefront of innovation around social cannabis product development and education since 2010. The brand is currently available in seven states: Arizona, California, Colorado, Maine, Missouri, Ohio, Oklahoma, as well as Puerto Rico.