Since we last saw Better Booch back in early 2018, the California-based company has been busy with a host of improvements, including a package redesign, new flavors and a new round of funding. Today, we’re taking a look at the revised and expanded line, which is a step up from its previous efforts.

While Better Booch is still offering products in glass, its 16 oz. can feels like the format that’s going to be the foundation for the company moving forward. We say this based not only on the current market, which has more and more can-based entries, but also on the overall look of what they’ve created. 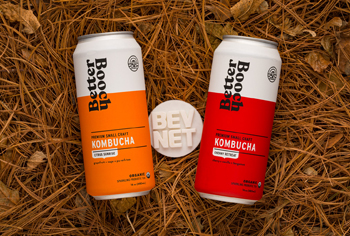 Aside from Morning Glory, the SKU names are pretty self-explanatory in terms of their flavoring and, as reflected by the modest amount of calories and sugar per can, all of the flavors are light and crisp.

All of the varieties are enjoyable and well-crafted, but the more basic flavors are the standouts and will likely be the most marketable. These include Ginger Boost, Citrus Sunrise, Cherry Retreat, Morning Glory and Golden Pear. The other two SKUs, Rose Bliss and Hola Horchata, are good, but these will likely require a larger leap of faith for the consumer and, therefore, will be tougher to sell.

Taking a look at Better Booch’s packaging, we think they have done a nice job of creating something that’s hip, modern and clean. The two-tone can design, which is about one-third white and two-thirds accent color to denote flavor, is vibrant and pops visually, especially when sitting alongside the other flavors.

From there, you’ll find the Better Booch logo running vertically with each of the two words facing inwards towards the other. This is slightly hard to read at first, but it’s a novel approach. Below that, you’ll find a hierarchically arranged list of callouts for “premium small craft,” kombucha, the flavor name and a short list of hero ingredients for the particular flavor. Overall, we like what they’ve created.

And yet, Better Booch could probably be more focused with a slimmer line with fewer SKUs. The liquid and variety that they have created in the other five flavors should be more than enough for the brand to go far and wide.