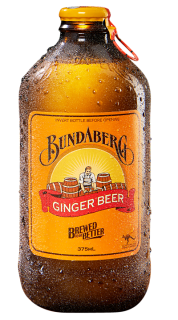 Los Angeles, CA (April 14, 2015) – With the rise of premium craft soft drinks and a newfound love of the Moscow Mule cocktail, Bundaberg Ginger Beer, Australia’s most loved craft-brewed ginger beer, has had unprecedented growth in the United State’s West Coast region. Bundaberg has also become the preferred choice of ginger beer for mixologists and bartenders throughout the Pacific Coast.

A Top-Selling Ginger Beer Along the West Coast: Family-owned, Bundaberg Brewed Drinks now has the #1 ginger beer brand and highest selling non-alcoholic beverage in BevMo! It’s also the #1 selling ginger beer at one of the largest specialty grocery retailers in the U.S., Fresh Market.

Bundaberg has also become the preferred choice of ginger beer for mixologists and bartenders throughout the West Coast.  As a result, we are now in over 7,000 outlets across the U.S. and can be found in 2,900 on-premise bars and restaurants, 2,200 off-premise independent retailers/liquor stores, and 1,900 chain stores.

Located in a small country town in Queensland Australia, called Bundaberg. We have kept true to our traditional brewing methods, crafting the finest premium soft drinks using locally sourced ingredients from the Bundaberg region where possible. We even grow, harvest and grind some of our own ginger to make our popular-selling craft-brewed Ginger Beer. Our Ginger Beer is non-GMO and gluten free with no artificial colors or flavors.

How we create the distinctive, discerning taste of Bundaberg Ginger Beer: We begin our brewing process by grinding ginger roots and mixing it with Queensland Cane Sugar and water. This mixture – the ‘Wort’ – is heated to release flavors, sugars and starches from the ginger. Then, a special yeast is added to ferment the Wort and extract the ginger flavor. After fermentation, the ginger is craft-filtered to leave behind just the right amount of tiny ginger pieces. These flavor-filled sprinklings of real ginger help give Bundaberg Ginger Beer extra flavor during maturation and beyond.

Afterwards, the brew is stored as a concentrate to maximize maturation and give it a unique full flavor. For days, we wait patiently until the brew reaches optimal maturation. Finally, the Ginger Beer is diluted with water, sugar and citric acid to achieve its drinking strength. With the approving shout of “fair dinkim”! – our Master Brewer declares the brew ready to be filtered and sent to our filler where the brew is carbonated and put into our signature brown glass bottles.

We recommend inverting the bottle for a few seconds before you pop the top, so the real pieces of ginger and spices are released into the drink. Hold it up to the light and you can see the delicious cloud stirring to life. This little ritual is also a nice gesture to greet your newfound friends from down under. Cheers.

The Attic in Long Beach, California uses Bundaberg Ginger Beer in several of their signature cocktails including their popular Mezcalito. Bar manager, Brenden Burley says, “It’s a great mixer because it’s well balanced, not too sweet, not overpowering, yet not too weak. Our Mezcalito has a smoky, herbal flavor to it and the Bundaberg Ginger Beer rounds that out.”

Cocktail consultants, The Bon Vivants have reinvented the neighborhood bar with Trick Dog in San Francisco, California where Bundaberg is the house ginger beer. Morgan Schick, Creative Director at The Bon Vivants says, “We use Bundaberg as our house ginger beer because it plays so well with a range of spirits: it makes a great Moscow Mule, but works equally well with rum or whiskey. And, when we’ve used it on the cocktail list, we can’t get people to drink anything else.”

At Bundaberg Brewed Drinks, we believe our commitment to quality and traditional methods has paid off as thirsty blokes and women everywhere are enjoying Bundaberg Ginger Beer. Fair dinkum!