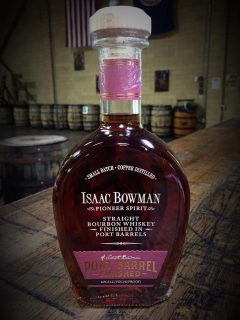 Smith Bowman Distillery finished its bourbon in a variety of port barrels from across Virginia and from Portugal for between three to six months, depending on flavor, before marrying them together to create Isaac Bowman Port Barrel Finished Bourbon. These barrels were made using American Oak and French Limousin Oak, with some barrels originating from Minnesota, Kentucky, Missouri, Virginia, and others. Master Distiller Brian Prewitt tasted these barrels every month to determine the optimum time to be emptied.

Prewitt describes this bourbon as having a dark amber color with a reddish hue.

“The nose greets you with our characteristic cherry and baked apple but supplemented with jammy fruit notes and balanced with the enticing aroma of vanilla, brown spice, and toasted pecans,” said Prewitt.

He describes the flavor as “bold and sweet with the toasty notes of French and American oak rounding out to a long smooth finish that pleasantly lingers on the palate.”

A portion of each batch will be held back for blending with the next batch to ensure consistency in flavor and color going forward.

This port barrel finished bourbon is named after Captain Isaac Bowman, the youngest of the Bowman Brothers, who was a soldier and Virginia militia officer in the American Revolutionary War. Isaac was at one point taken as a prisoner of war, but was able to make a historic escape before embarking on a two-year adventure and then returning home to Virginia. He then settled down at Fort Bowman Estate where he became a prosperous farmer and landowner. The Distillery felt it fitting to name this bourbon after Isaac whose great American spirit was evident throughout his life and many adventures.

While Abraham Bowman Port Finished Bourbon was only released once in limited quantities, Isaac Bowman will be offered as an everyday item as part of the Distillery’s standard line of spirits for the suggested retail price of $39.99. Isaac Bowman will launch initially in Virginia only, but eventually spreading into North Carolina and a few additional markets.

About A. Smith Bowman

Smith Bowman’s distilling roots date back to the years before Prohibition when the Bowman family had a granary and dairy farm in Sunset Hills, Virginia. They used excess grain from the family estate to distill spirits. In 1934, after the Repeal of Prohibition, Abram Smith Bowman and his sons continued the family tradition and built a more modern distillery in Fairfax County, Virginia called Sunset Hills Farm. The Distillery was moved in 1988 and is now nestled in Spotsylvania County near the city of Fredericksburg, 60 miles away from the original location.

As a small and privately owned company, A. Smith Bowman Distillery continues the time-honored traditions on which it was founded. Considered a micro-distillery by today’s standards, A. Smith Bowman produces an assortment of hand-crafted spirits distilled from only the finest natural ingredients and using the latest technology. This micro-distillery focuses on the production of premium spirits honoring the legacy of Virginia’s first settlers. Its various brands have won more than 100 awards in the past five years, including “World’s Best Bourbon” in 2016 for its Abraham Bowman Port Finished Bourbon and again in 2017 for its John J. Bowman Single Barrel at the World Whisky Awards. For more information on A. Smith Bowman, please visit www.asmithbowman.com.