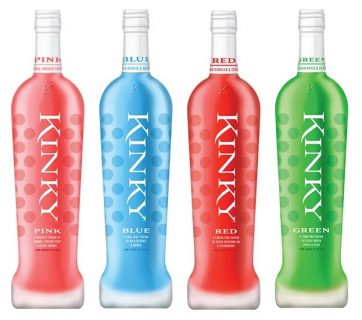 Since its launch in 2011, KINKY has been at the heart of high fashion, but even the most stylish divas need a wardrobe redux every now and then.

KINKY’s brand new look is red carpet ready! With polka dots that dazzle, their playful new package is designed to pop. The enlarged vertical logo will help KINKY stand out on the shelves, while the clean white capsule provides a touch of classic sophistication.

“We are very excited to refresh KINKY’s already iconic packaging and we were challenged to come up with a new look that felt modern, fresh, and just a bit naughty,” expressed KINKY Beverages Creative Director Joanne Campo.

“The new vertical branding is eye-catching and impactful, and the subtle polka dot pattern is a playful nod to timeless fashion,” notes KINKY Beverages Brand Manager Kelly Tomek. “The sleek bottle shape and simplicity of the design really allows the vibrant colors of the product to pop, intriguing consumers to take a closer look.”

To celebrate the nationwide launch of the new packaging, KINKY is pulling out all the stops. In addition to a complete brand refresh, KINKY Beverages will collaborate with influencers such as @Aww.Sam, @JennaJordan, @VioletTinder, @ArsenicLace, @AmyShamblen, and @DowntownBlondie, making sure everyone is there to see their daring debut.

The new KINKY Liqueur 750ml bottle design is expected to hit the shelves nationwide in April with an SRP of $19.99.

Prestige Beverage Group launched KINKY Pink Liqueur in 2011 and received the Impact Hot Brand Award by Market Watch Magazine soon after. Since then, KINKY Beverages has added several fabulous friends to its flirty line-up. With KINKY Blue, Gold, Red, Green and Aloha Liqueurs, KINKY Vodka, KINKY Cocktails, EXTRA KINKY and X, there’s a different way to get naughty every night of the week. Available at major retailers and on-premise accounts nationwide. KINKY Beverages is owned by Prestige Beverage Group and distributed throughout the U.S. For more information about KINKY Beverages and exciting KINKY recipes, please visit us on Facebook, Instagram, Twitter, Pinterest or at kinkybeverages.com.