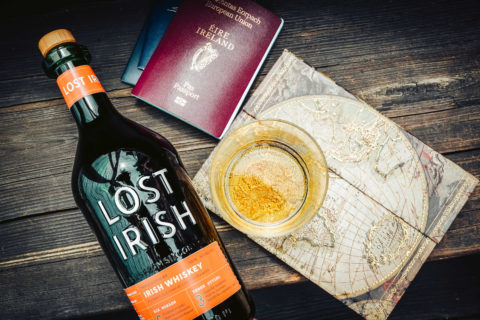 NEW YORK, N.Y. — Born in Ireland.  Lost in the world.  Lost Irish – a modern whiskey inspired by a wanderlust for world travel, adventure, and the many stories of the Irish across the globe – launched in the US.  In true Lost Irish spirit, the Irish whiskey is made from six worlds in three styles to embody the wandering Irish spirit.

Adding to the complexity and worldly flavor, Lost Irish is a blend of all three styles of Irish whiskey – grain, malt and pot still – which makes it very untraditional.  The grain adds a distinct lightness to the blend with a sweeter taste and almost floral aroma. The malt adds a rich and rounded balance, which is fruity and soft.  And the addition of a classic pot still style delivers a full and creamy mouthfeel with a hint of peppery spice.

While the Lost Irish adventurous spirit brings creativity and originality, there are some practices just too good to lose. Lost Irish celebrates Ireland’s triple distillation process, which delivers a renowned smoothness unlike other whiskeys.

Lost Irish was founded by Neil Sands and Tim Herlihy (childhood friends from Termonfeckin, Ireland) in partnership with Casa Lumbre.  Sands has a creative entrepreneurial background and Herlihy has been involved in Irish whiskey for over 10 years as an Irish whiskey ambassador and whiskey author. Lost Irish is inspired by their own experiences as proud Irishmen with a love for traveling the world.

Herlihy proudly says, “The idea for Lost Irish stems from all my adventures around the world.  While the category continues to grow, it is now primed to evolve into something that is a true reflection of modern Irish.”  He continues, “After many years exploring how the world perceives all things Irish and how the Irish influence the world, we realized we were ready to bring something unique to life.  We’re eager to share a more accurate view and reflection of Ireland with bartenders and drinkers around the world.”

In true Lost Irish fashion, the whiskey company has partnered with a team outside the geographic bounds of Ireland:  Casa Lumbre.   Born and based in Mexico, Casa Lumbre is a global spirits company that develops, produces, and incubates premium, award-winning spirits. Originally known for Mezcals, Liqueurs and Tequilas, Casa Lumbre continues to tap into its global values and perspective to expand beyond Mexican distillates.

Casa Lumbre CEO and Co-Founder Moises Guindi said, “Our goal is always to create disruptive brands that meet unaddressed consumer needs in the spirits industry by elevating rarely showcased processes, products, and perspectives. Today’s innovation and consumers are not restrained by the traditional way of seeing spirits, or bound by outdated structures of geography, ingredients processes and categories.”

Southern Glazer Wine & Spirits (SGWS), the multi-generational family-owned company known for a preeminent collection of spirits, takes on distribution by adding this modern Irish whiskey to its portfolio. Select focus markets for Lost Irish distribution include New York, California, Illinois and Texas.  Expanded US and international distribution will continue through 2021 and 2022.