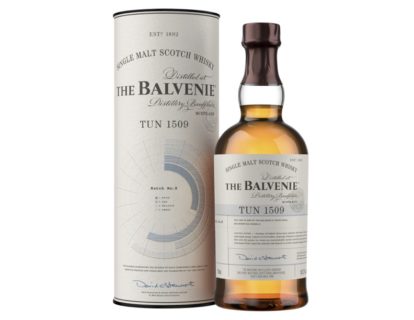 NEW YORK, N.Y. — The Balvenie Single Malt Scotch Whisky announces the U.S. release of the eighth and final bottling in the distinguished Tun 1509 series: The Balvenie Tun 1509 Batch 8. Continuing the legacy of the highly collectable Tun ranges – Tun 1401 and Batches 1-7 of Tun 1509 – this exclusive expression further exemplifies the unrivaled expertise of Malt Master David C. Stewart MBE in marrying precious aged stocks, which he has acquired through a lifetime dedicated to his craft.

Tun 1509 Batch 8 encapsulates the true craftsmanship of The Balvenie, as it features 18 of the finest and most rare casks from the distillery, each expertly hand-selected by David C. Stewart MBE, and married together in the Tun – a large oak marrying vessel that sits proudly in Warehouse 24. The very process of knitting together liquids from a range of casks is a careful and complex art, but the rare technique of marrying the liquids in Tun 1509 provides the optimum environment for the whisky’s composite qualities to mix. The final liquid – a non-chill filtered whisky, left to marry for three months – is an expression of exemplary quality and unique character, greater than the sum of its constituent parts.

Through Stewart’s unparalleled expertise in single malt maturation, the end result is a remarkably rich whisky, intense in flavour thanks to long maturation in ex bourbon barrels, second fill sherry butts, refill puncheons and new sherry butts. On the nose, there are sweet flavors of baked citrus tarts intertwined with aromas of orange marmalade and maple syrup. To taste, an unmistakable texture flows over the palate, offering a blend of rich toffee sweetness, buttery vanilla and a swirl of honey to form the perfect sip. The initial sweetness from perfectly toasted oak, disperses to reveal layers of candied ginger, a hint of cardamom & ground aromatic spices to create a remarkable drinking experience.

“The Tun 1509 series draws to its completion with Batch 8,” says David C. Stewart MBE. “This Batch is a remarkable marriage of casks which result in a deep and rich Balvenie. To taste we have a rich toffee sweetness, buttery vanilla and a swirl of the house honey style – layering to candied ginger and aromatic spices.” Each bottle of Tun 1509 Batch 8 comes with in-depth detail on the whisky, with a breakdown chart and visual representations of the flavor profile of each constituent cask and the overall character of the resulting single malt. Tun 1509 Batch 8 will be available in limited quantities in the U.S. beginning in October 2021 at an SRP of $410.

The Balvenie is a unique range of single malts created by David C. Stewart MBE, The Balvenie Malt Master, who celebrated his 50th year at the distillery in 2012. Each has a very individual taste, but each is rich, luxuriously smooth and underpinned by the distinctively honeyed character of The Balvenie. The Balvenie is dedicated to the five rare crafts that are used to create The Balvenie’s distinctive taste. It is the only distillery that still grows its own barley, uses traditional floor maltings and keeps both coppersmiths and coopers on site – making The Balvenie the most handcrafted of malts. The Balvenie Single Malt Scotch Whisky is produced by William Grant & Sons Ltd, an award-winning independent family-owned distiller founded by William Grant in 1886 and today run by his direct descendants.

William Grant & Sons Holdings Ltd. is an independent family-owned distiller headquartered in the United Kingdom and founded by William Grant in 1887. Today, the global premium spirits company is run by the fifth generation of his family and distils some of the world’s leading brands of Scotch whisky, including Glenfiddich, The Balvenie range of handcrafted single malts and the world’s third largest blended Scotch, Grant’s, as well as other iconic spirits brands such as Hendrick’s Gin, Sailor Jerry Spiced Rum, Tullamore D.E.W. Irish Whiskey, Monkey Shoulder Blended Malt Scotch Whisky and Drambuie Scotch Liqueur.

William Grant & Sons has been honored as “Distiller of the Year” by the prestigious International Wine & Spirit Competition and International Spirits Challenge 13 times over the past 14 years, including the most recent award in 2020.